Here’s a story for you. My first  job was working at the most authentic Mexican and Salvadoran restaurant in the DC area, 19 years ago. I don’t think I’ve ever shared this key point. But, it was my first time in a commercial kitchen. I had an intimate and very personal connection to the restaurant which expanded my role from server to kitchen stalker, though I was really a waitress. My niece’s grandmother, a non-English speaking woman from El Salvador owns the restaurant. I was merely 13 when she took a risk and opened it to a vastly white neighborhood but increasing number of central and south Americans.

Prior to that, when my brother and her daughter were dating, I remember the super illegal, underground “cantina” she ran out of her dilapidated rambler in a nearing neighborhood. I wasn’t even 10 at the time, but remember hanging in that little blue house many summer afternoons, standing in her itty bitty cocina, watching her mother rhythmically slap masa back in forth, between each hand. She had this perfect timing in flattening out the dough, creating a divot, stuffing it with cheese, and revert back to the slapping, though slower the second time. The imperfectly rounded thick cheese-stuffed tortilla was the end result. She laid them on a stovetop grill pan and cooked them to oozy perfection.

That’s when I fell in love this typical street food, costing all of $1.00/each at the time. For a 10 year old, they were a special treat when we didn’t want fast food. I realized many years later that my palate was not all refined as I thought for a young child as much as it was sheer cultural. Kind of how Cubans eat, drink, sleep espresso; Salvadorans eat, drink, sleep pupusas.

So by the time I convinced my brother’s girlfriend’s mother to let me work at the restaurant, mostly because everyone knew the men there tipped over the top well, I was so geek’d! I worked those tables but was far more curious with how it all went down in the micro kitchen. I spent my breaks with the owner, but mirroring the sole lady tasked with slapping the patties into shape. I was allowed to throw them on the grill and flip them until golden brown. 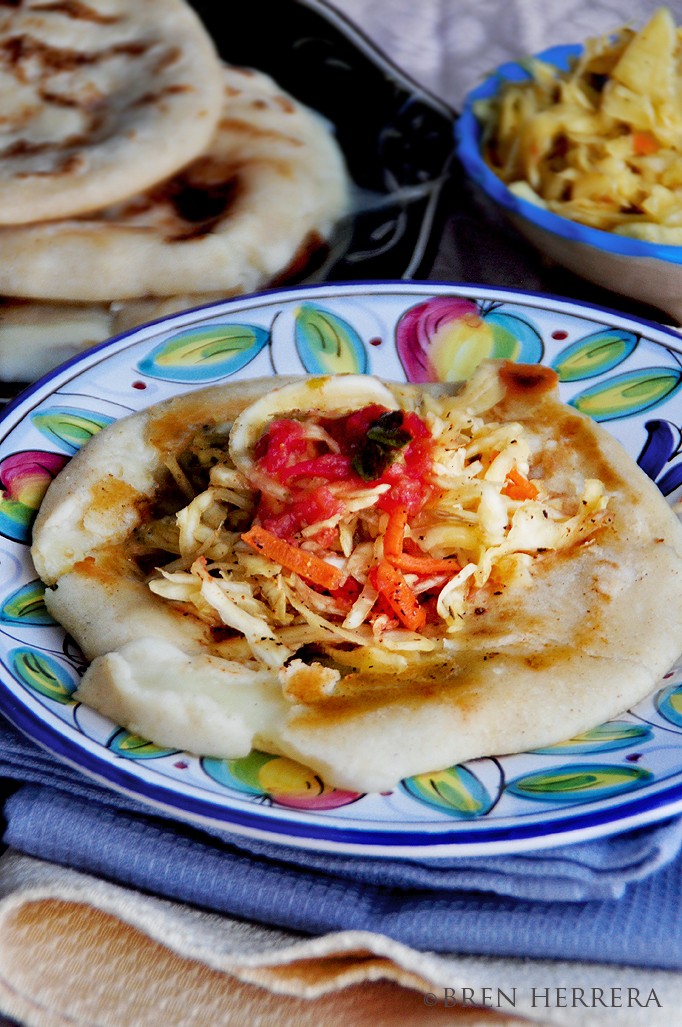 They cranked out pupusas like water running out of your faucet. Non-stop. Fast and furious. Thousands a day.

Topped with the best repollo, a pickled cabbage slaw and spicy house made salsa, pupusas were heavenly. It was like manna feeding the hungry. 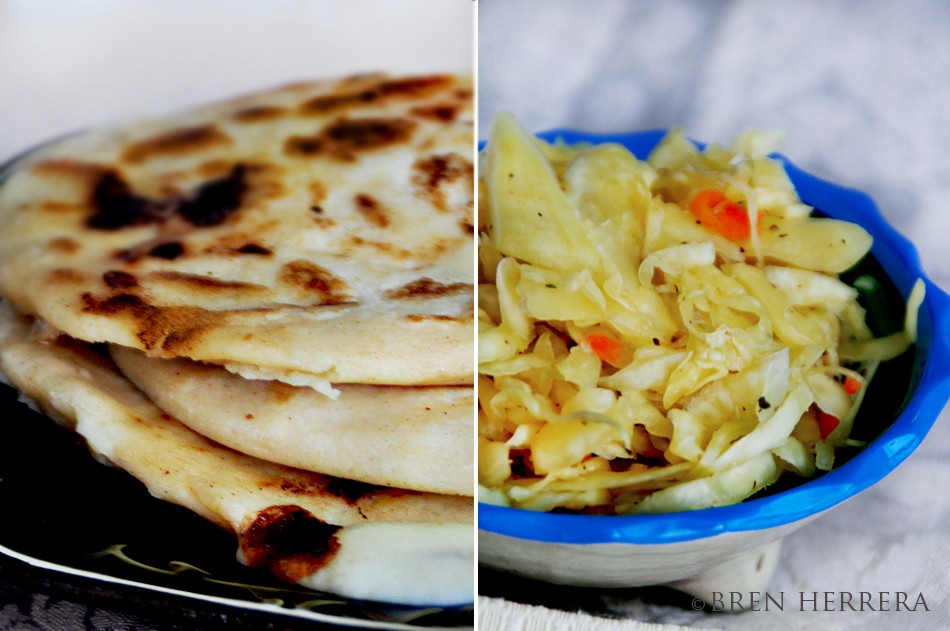 I ate them in all their glory up until I 19 when the manager asked me to translate the menu from Spanish to English. The most popular pupusa is the mixed one made of shredded pork and cheese. I loved it like the best cup of espresso. Until I got a redlined edit of the menu asking to change “beef” to “pork.” I about lost it! What?! I had been eating pork this whole time?! All because the menu in Spanish said carne?! What, what?  How could they not know carne is NOT cerdo? Or whatever they call pork? My feelings were hurt. I’m not sure if it was because I had been eating something I religiously abide by not, or because I’d no longer be able to enjoy them.

That single incident killed any love I had for pupusas.

For many, many years.

Until about one year ago. When Publix contacted me about developing Latin recipes for their Christmas issue of their new magazine, I immediately thought of those days when I learned how to make them. I ended making arepas, which I equally love, but still kept my mind on the cheesy and spicy goodness of pupusas. They were such a big part of my culinary introduction. I didn’t even the role they’d play in my life.

And now that I’ve been working with Tabasco and Sargento Cheese on creating fabulous recipes for them, individually, delving into culinary trends and exploring new ways of using their products, pupusas were the absolute perfect dish I could come up with.

I wasn’t going tackle the mixed one, naturally, but that just left room for making an all cheese one really sing! Cheese and heat have been recurring theme in my cooking lately. It’s a seamless marriage. It’s easy. It just makes sense.

I toyed with either adding heat to the cheese mixture or making the repollo, the sexy topping, spicy since traditionally, the salsa is what gives it heat. I debated, played around, and did my little trick. I added a bit of Tabasco’s Traditional Hot Sauce to the corn dough mixtures. I had thought about adding the hot sauce to  Sargento‘s Mozzarella and White American Cheddar shredded stuffing but thought I’d reserve the dousing of  Tabasco‘s Garlic Hot Sauce for the cabbage slaw. A bit of heat on both ends deviated from the ultra tried and true recipe I’d been enjoying most of my life, but I had to switch it up. Heat gives everything an amazing touch, and we already know what cheese does to our moods. The garlic hot sauce was the perfect kick the repollo needed to counter the thick tortilla. Plus, you know me, garlic is part 1 of my holy cooking trinity.

It all just worked. And see hip weight coming on.

What I’ve learned in this whole year’s process of cooking with heat and cheese, is that we really can adapt our palates to just about anything. Cuban food doesn’t take heat. We have a lot of spices, but our food is not hot and peppery. Central American food is. Cuban food also doesn’t use cheese a lot, and while I grew up eating cheese (and a crazy amount of hot sauce on our yellow rice—that’s religious indoctrination in my parent’s house), it’s not something I’ve gravitated towards in a lot of my cooking. Central American food does. Lots of it. Their diet is very much a spicy and cheesy one. But with the intense amount of researching and developing I’ve been doing, I’m loving the many ways I can add both ingredients to my classic food. 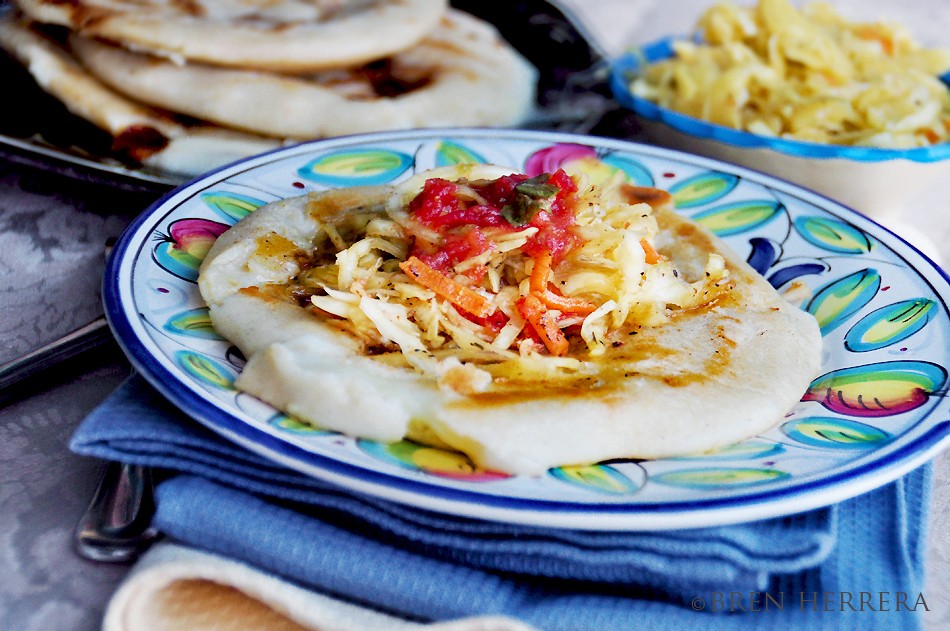 Back to these pupusas. They are a hit. They are superb and a man’s cry for good, fattening soul food. It’ll settle any negative emotions, enlighten darkened moments, and give life to a dormant appetite!

At least that’s what happened twice to me this week after eating the 10 I made.

Cheese and hot sauce my friends. It works. In fact, check this and this out! You’ll see the magic!

* This post is part of my work with Sargento Cheese and Tabasco as a recipe developer. All stories, opinions, and recipes are my own, authentic and real. 🙂 Enjoy!

In large mixing bowl, add flour,  two cups water, and hot sauce. Using hands, fold and blend well until mixture turns into a super soft dough, kind of like play dough. In separate bowl, blend cheeses, squeezing roughly using hands until really soft. Take a golf ball size amount of dough and gently but consistently flatten into your palm, creating a divot in the middle. Add 1-2 tablespoons of cheese in center. using both hands, fold dough over and close into a patty. Turn with both hands, smoothen and round out edges. Once shaped into a patty, transfer from palm to palm until flattened out to about pancake size. Place on greased hot griddle and cook for 1-2 minutes on each side until golden and you see cheese oozing out.

Repeat for each pupusa. Using hands, sparingly add water to dough mixture as you go to keep it moist.

The trick to making pupusas is your hand movement and consistency. Practice! It’s kind of like an arepa, but not.