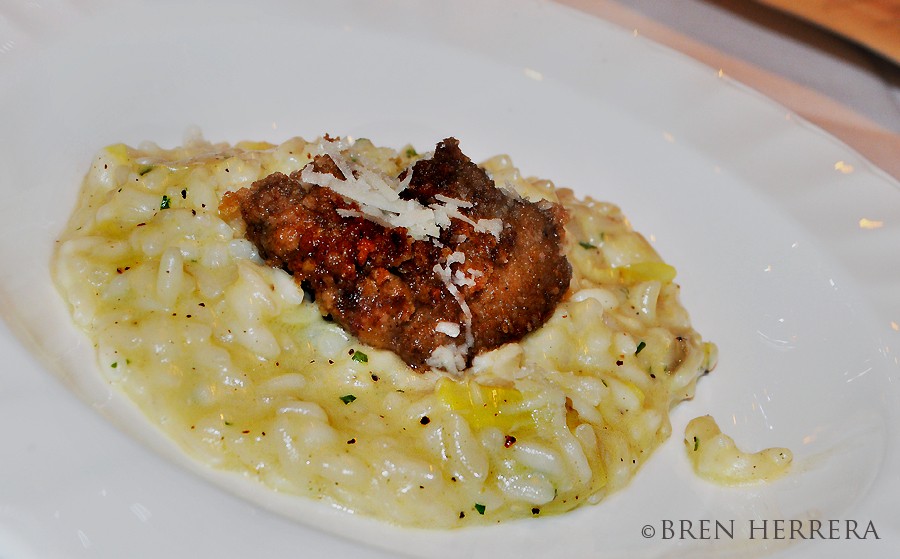 What in the world do you do when you’re invited to attend a culinary festival where all you do is eat, drink and repeat? Well, you go on a diet, of course. Only because you have to make room for every single thing you’re guaranteed to enjoy; especially when your backdrop is an island, full of breezy evenings, super nice people and where happy hour is determined by your social needs, not the strike of 5! These are the very key points I considered when packing for St. Croix. Every year around this time,  thousands of people congregate to eat, wine, dance and sunbathe. Thanks to the Food & Wine Experience, now in its 12th year, a gal like me can hit the beach with a full belly and not have a worry in the world. At least for 5 days in April.

I was lucky enough to be invited to attend the laid back and thoroughly executed festival last spring in which I became a total glutton. The itinerary involved more eating than you can imagine, inclusive of gastronomical challenges and soirées, cooking lessons and demonstrations, wine tastings and outdoor excursions throughout the island, all intertwined with the festival’s schedule and theme. Yes. 5 days of full feasting. Ooh wee. This was going to be fabulous.

When I first arrived on the island, I was quickly transported to The Buccaneer Hotel, the very pretty, stucco style resort. With no time to swing my ocean front patio door wide open and breathe in the breeze swiftly swaying back and forth, I hopped in the shower and got dressed for the welcome dinner.

I know I’m in a for a long treat when a festival kicks off the week of festivities with a Gourmet Vintner’s Dinner featuring cuisine from “Top Chef” Fan Favorite, Tiffany Derry! The spunky and very colorful owners of the host restaurant, Tutto Bene, invited a seemingly exclusive group of journalists, faithful festival attendees and St. Croix’s high society residents (not that any island should ever give off the vibe of having a status class) to casually dine at their popular spot.

Nothing about dinner was uppity or stuffy. A  fine young man played a piano and serenaded guests with jazz tunes but the ambiance was just as familiar and cozy as a visit to your best friend’s house. 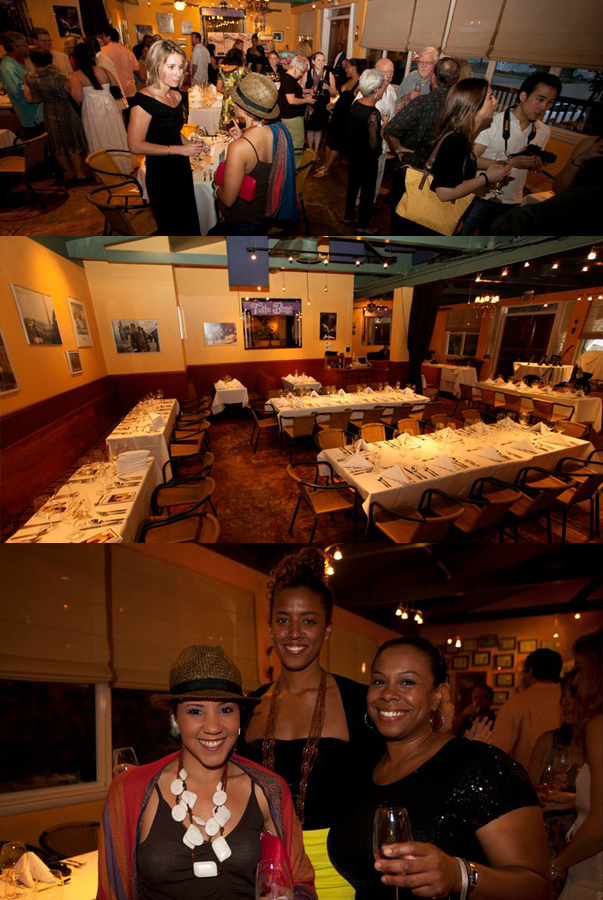 After some hob-knobbing, nibbling on canapés and enjoying chatter with locals (all whom speak with tremendous pride about their island and the unassuming quality of life), we started our 5-course dinner. I sat next to the lovely and quite funny Dannielle Kyrillos from Top Chef Desserts, who was going to be teaching  a kids cooking class over the weekend. We noshed on the deconstructed ceviche followed by a chicken livers risotto, which I admittedly finished with such speed, you’d think I was starving back at home! But the oxtail patty did me in. Surprisingly, some guests at our table, mostly festival organizers, aren’t fans of this superbly refined cut of meat. I mean really!? Who doesn’t eat oxtail? Since I’m not known for my shyness, each untouched patty made its way to my space, one by one. Total=4. 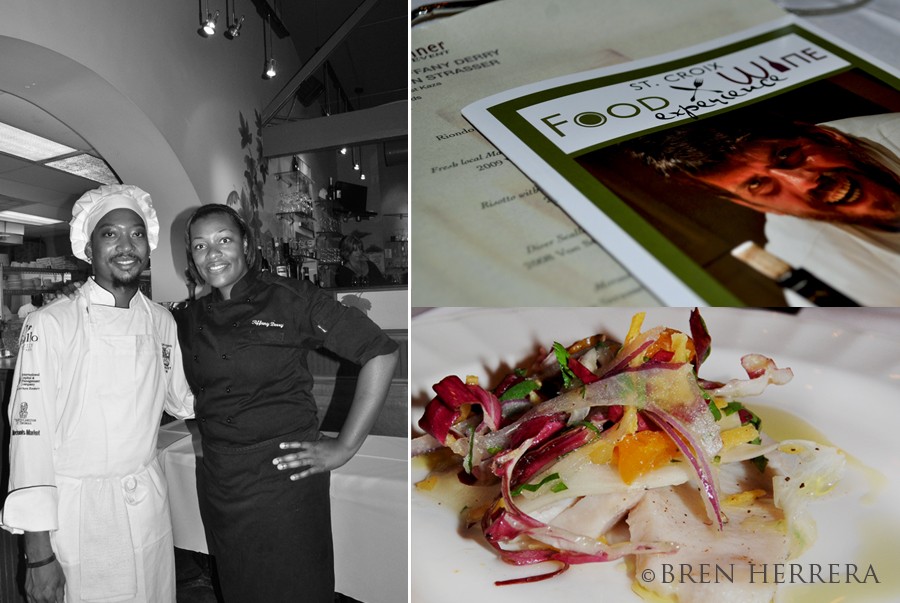 I was able to sneak into the kitchen between courses to introduce myself to Tiffany. What a sweet, focused gal. She was accompanied by her sister, Brandy, who plays her sous chef.  “Tiff,” as I later started calling her, squirmed around plating and still managed to answer some of my questions regarding her meal options. She spoke with a huge smile but very determined to not have guests waiting.

If dinner set the tone for what the rest of the week was going to be like, then I needed to pace myself and take it sloooooow. There was no way I would survive 5 days of enjoying fine food, home-cooked meals and local faves; at least not if I ate the way I did at the Vintner’s Dinner. The gluttony began.

I skipped on breakfast the following morning only because I still tasted oxtail and dark chocolate ganache cake. I was begging for some walking so it was a good thing we spent 5 hours at an organic farm. More on that in a 2nd post, but let me just say that we ate some good ol’ home cooking by a Mississippi native.

This wasn’t your average food fight, though. The beach was the stage.  Boys against Girls. Tatas against you know what! The 6 featured chefs, a combo of locals like the fine Leslie Gumbs and mainland talent like Liza Shaw, faced each other  in two teams where each had 30 minutes to create a mouth-watering dish with pre-selected ingredients, mostly seafood. In food reality tv fashion, the clock started ticking and the chefs went at it. They were on sand my friends. And wearing flip flops. Tiffany had an advantage during this challenge since it mirrored an episode on Top Chef. She went for the conch which she beat to death with a hammer. Anyone who can crack a conch shell, sinking into sand with hair flying in your face has got some serious chops… She killed it so violently that a similar shot to the one below, made it to the front page of the local paper the following day. 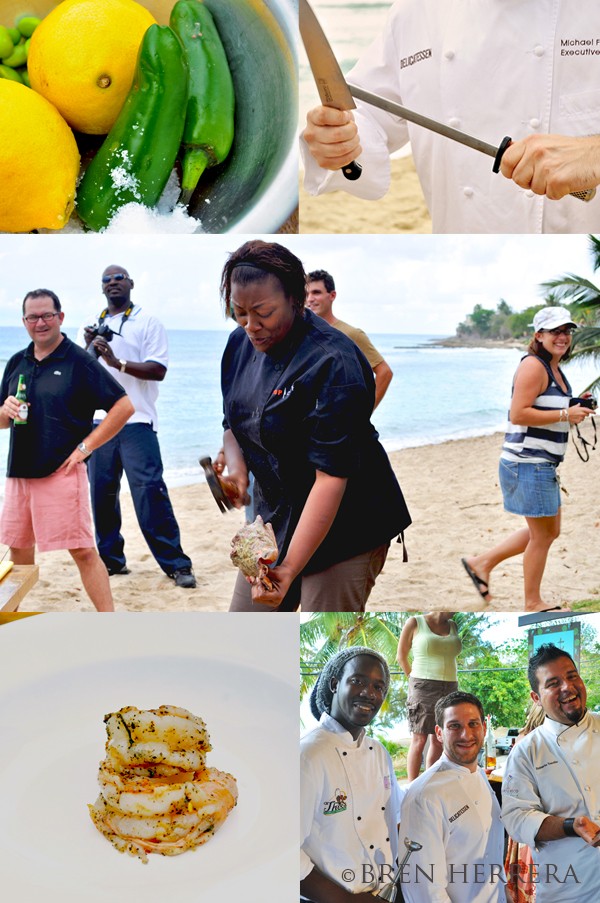 Both teams grabbed lovely and very lively lobsters; the prettiest meat available to them.  I got blasted by fellow Latin chef, Roberto Treviño when I helped the girls out by pointing to their lighter fluid under their table (yes, we made up later because two arguing Latinos can never end well). A girl’s to do what a girl’s gotta do. The girls had a quiet plan… they worked together seamlessly, two at a time (one was battling it out over cocktails at the restaurant across the street), to create a dish that’d have the boys crying. And so they did! After 30 intense minutes of running, sweating, making a sofrito and burning palm leaves, the chicas plated their colorful seafood dish and ran it up to the guest judges. 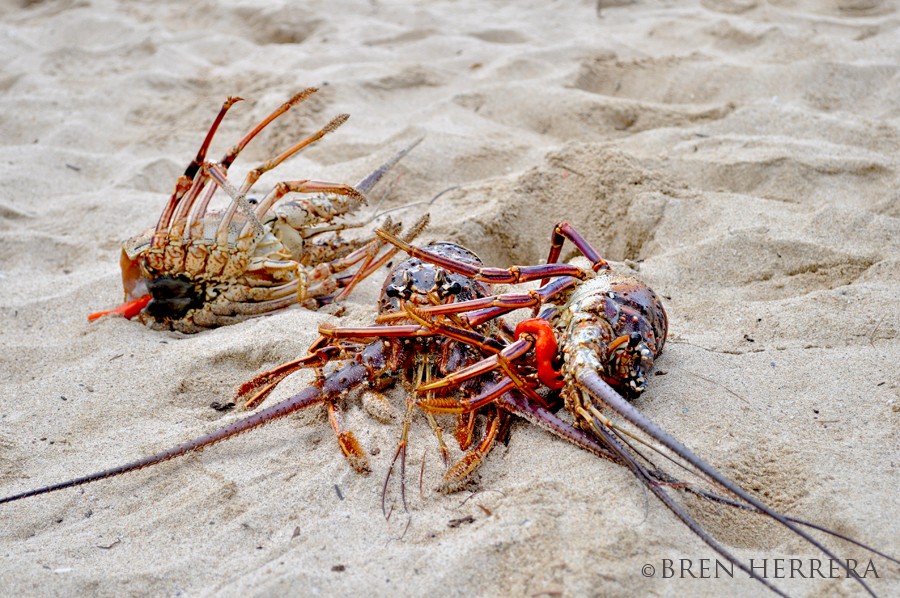 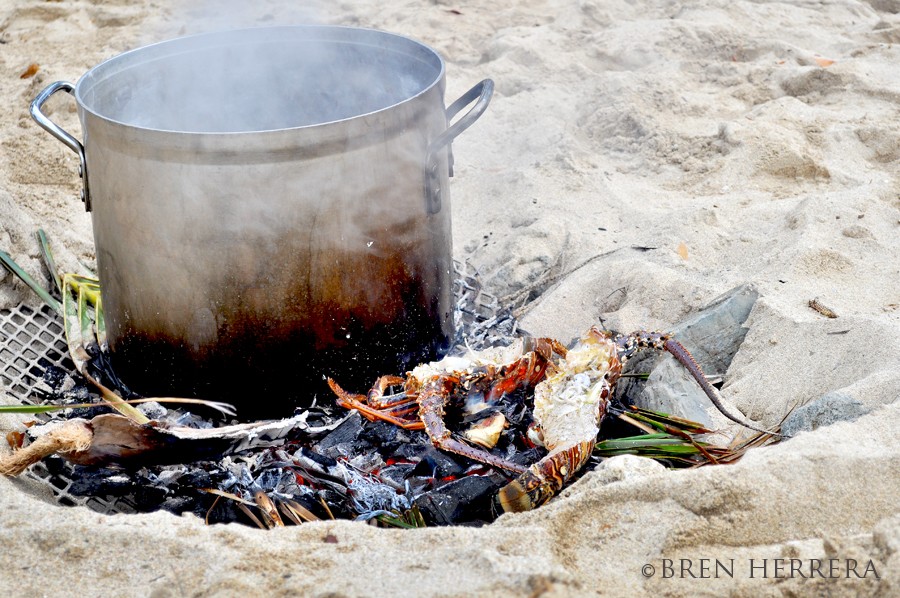 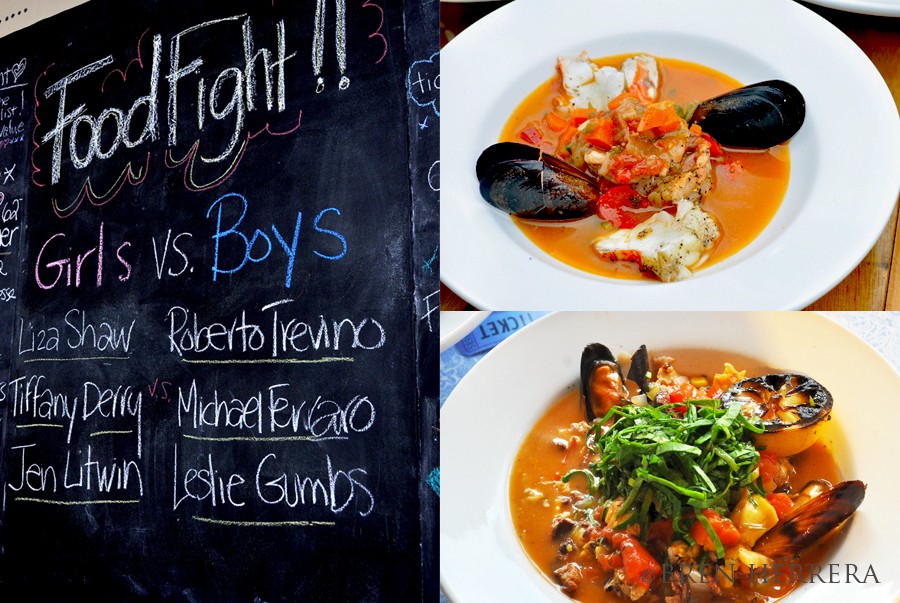 Both dishes tantalized the entire crowd. The smell permeated the open space until it made its way to the crowning table. A combination of shrimp, mussels, lobster and conch resulted in gumbo style soups. From the facial reactions of the judges, one was peppery and appropriately seasoned for island beach fare, while the other was more typical. And guess who the latter belonged to! To no surprise, the girls one both the cocktail and main entrée challenge.

A perfect 3 hours on the beach ended with a spectacular sunset that shined on a sign reading “Hey Many, Respect the Beach.”  That’s pretty much the mood everywhere you go on St. Croix.

And that my friends, is a good life. 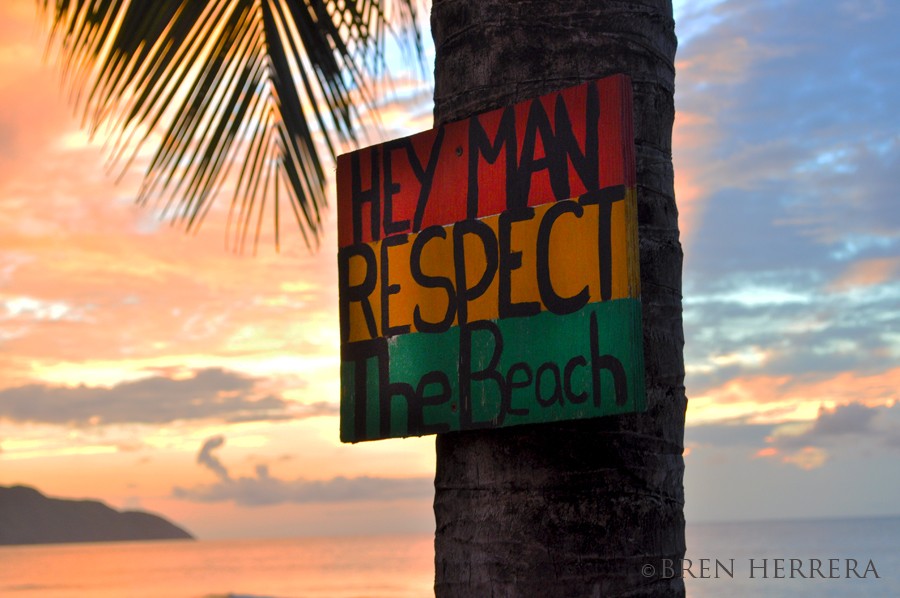 This was the 1st full day of what was to come. Not to mention, we still had to split for dinner. At this point, I had already gained two pounds. That’s okay though. It was two pounds of colorful and beautifully presented cuisine and I was only getting started! Have I told you how much I love my work?!  It can’t much better than this.

Part II of this insanely delicious food festival will touch on the humbling and earthy visit to the organic farm.

If you’ve not heard of the St. Croix Food & Wine Festival, check out their site for information on this year’s fest, set to kick off in just two weeks. Tickets for all events are already on sale.

1 year ago by Bren Herrera
This thing is real. Yes, the meme are funny on first glance, but when we consider over 114,000 confirmed cases of Covid-19 and over 3,500 deaths, world-wide, then, yes, the Coronavirus is more dangerous than influenza. The entire country of Italy is shut down....

How to eat Real Fancy in Boise: Go To State & Lemp

4 years ago by Bren Herrera
The modern concept of American fine dining comes with a preset of aesthetics and feelings, no longer simply the quality and relevance of the food. I remember a time when the only variable we considered was price and quality. And then social media, especial...