(the sexiest oyster I’ve ever seen!)

There are a few things in life I dare not do. Bungee jump is one of them. Swim with sharks is another. And eating pork is the given one.

But I’m always looking for something new to do. Something outside the box and that my friends would ask “who’s paying you to do this?”. I can now add that *something* to my list of activities.  And I liked it.

The Steamhouse Oyster Lounge, from what I was told by my Atlien friend, is an institution in Atlanta. And their annual rock star studded Oyster Festival is on their 26th year. I’d say a sure way to be recognized as a landmark. I’d never even heard of the place. But then again, it’s shellfish outpost and you all know how I don’t do shellfish. The former resto rolled out a myriad of emotions when it shut its Buckhead doors last year. Much to the ol’ faithful’s satisfaction, it moved over to Midtown. It clearly needed the space.

I was curious about the 2-day Oyster fest. Very curious.  So I got tix for me and my Atlien friend and we made our way to Midtown on Sunday to see what the hype was about. 40 degrees, apparently too cold for locals, was the perfect setting for screaming rock bands that welcomed us upon our entrance. I initially felt like I was walking in one of those fun houses in summer carnivals. The new Steamhouse was set to the left with lots (at least 300) of jovial oyster-eaters smart enough to stay warm inside. I don’t think I’ve ever been in a restaurant so crowded. I almost sat down, but all I did was skim the menu. I would have taken up valuable real estate. And tho the crowd was lit up from drinking cerveza, it was well under control.

A waving Puertorican flag hung from the center beam. So random, but okay. 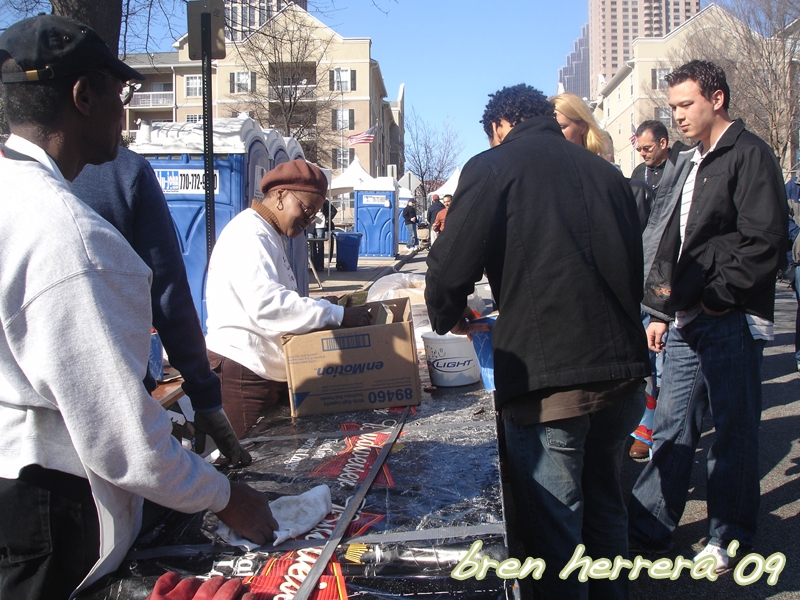 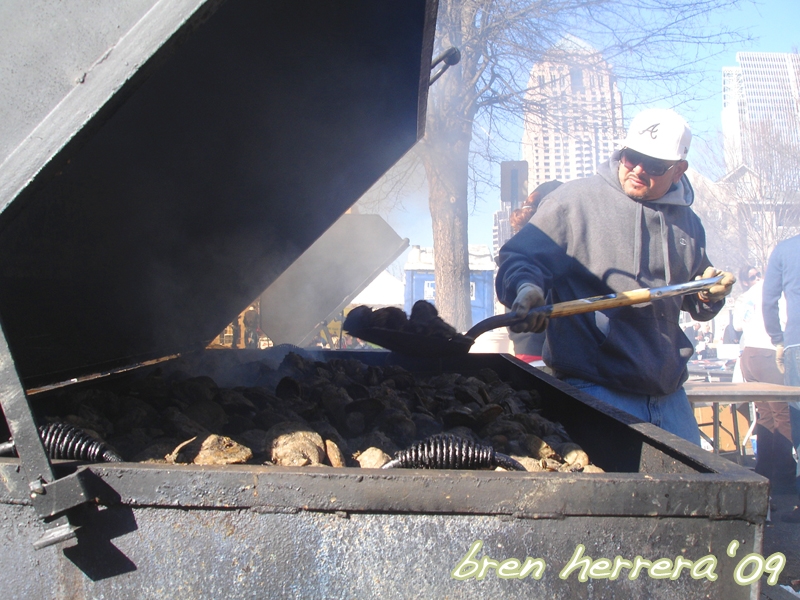 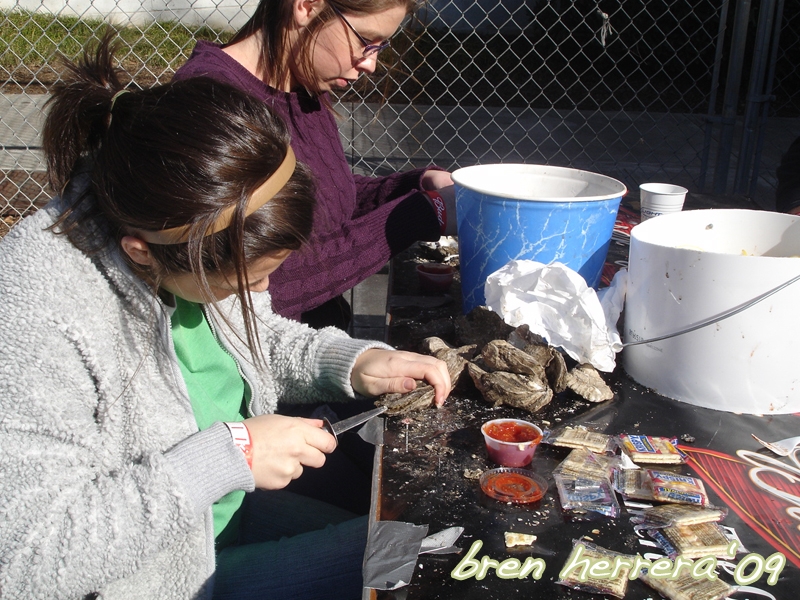 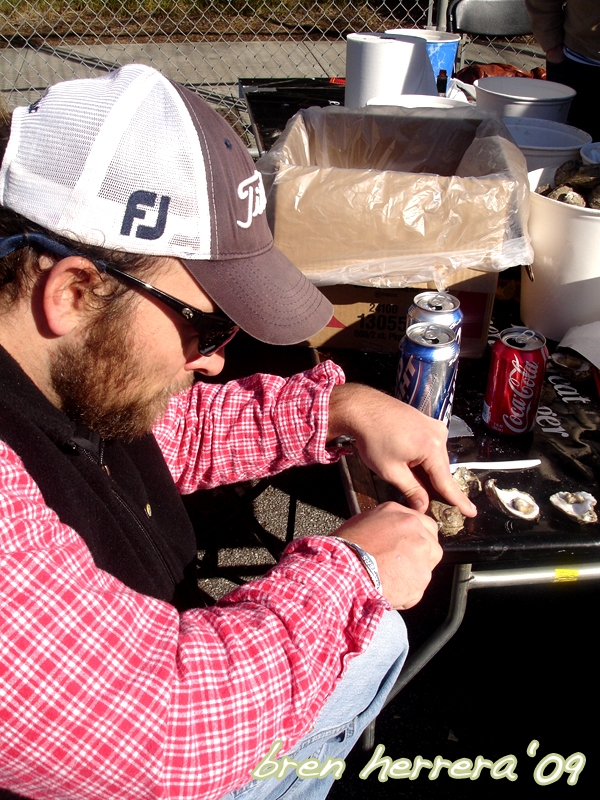 So my Atlien friend, clearly a fan of past festivities, and I make our way to the outdoor shucking area. This is when it gets interesting! Drew and I didn’t want any oysters, so we just paused, and like silly kids, watched the masses try to pry open the lightly steamed oysters. It was hilarious. Nothing like I’d ever seen. Now you may be wondering why I was so tickled. It’s just a whole lot of people eating oysters, right? Not so much. This was a competition. A self-challenge of sorts. Patience and class were the ultimate goal. How many oysters can you shuck with your bare hands before you give up? Or cut off your index finger? One guy was bleeding in his thumb and  later (as if I hadn’t just witnessed him almost slaughter his finger) offers me the oyster that took him 5 minutes to crack open! That was pretty much the spirit of the day. They squirt fresh lemon and hot sauce on their juicy oyster and smile.

Oh, and beckon a friend for more beer!

With blazing rockers in the background, people were intently focused on shucking their gooey oyster. One chick threw her oyster on the street in apparent frustration. I think she ultimately managed, but who knows.

I’m standing there amazed at how another 300 people were steadily buying extra large buckets of oysters for $12 and Drew is coming up with promo products to make the shucking less painful. He had a great idea I’ll pitch to their marketing team. 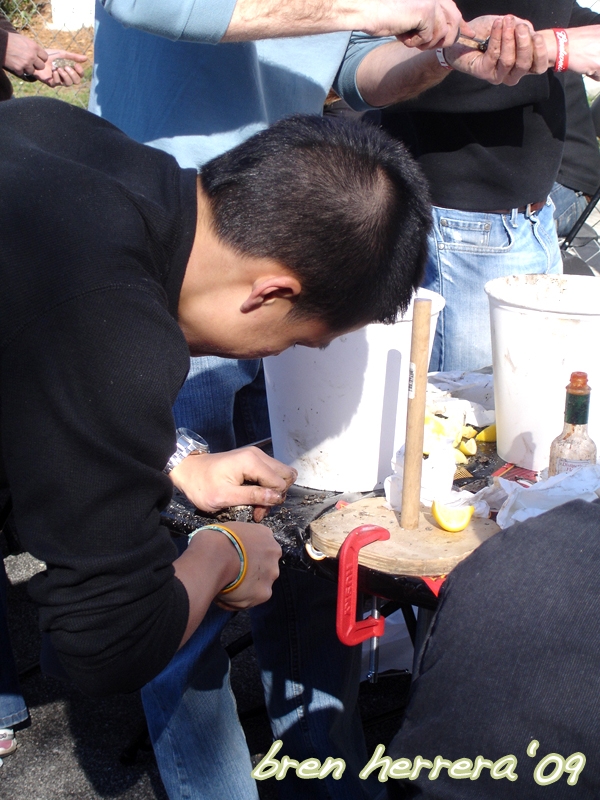 I’m not a huge punk rock fan (unless its Def Leppard or Rolling Stones) but the band playing at the time was getting it done. Their foresight that “we’re all going to hell” had the crowd pumped. I like to think I’m not going to hell. One unsuspecting teenager clearly disagreed! He was on the grassy standing area playing air guitar and thrusting his head back and forth so aggressively, I thought it was going to pop off. Do you know that Lil’ Kim song “put your lighters up?” Well, it was more like “put your beer cans up”!! The beer station insisted on being tipped, otherwise you were called “that guy.” I told her I was press so she wouldn’t make me tip for taking a picture of her tip bucket. 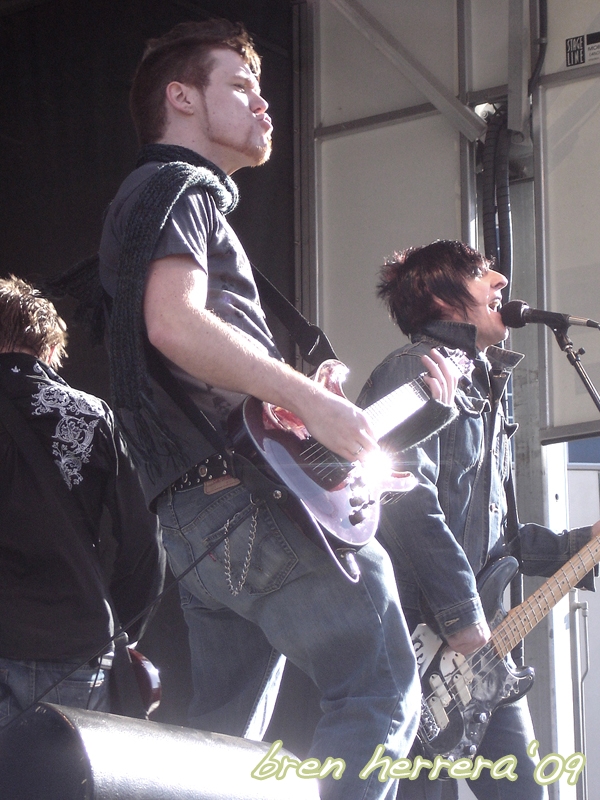 I can see why this classic city event is now reminiscing on it’s 26th successful weekend. Nothing but good ol’ fun. Well-worth the $12 tix if you’re an oyster-lover, or really just looking for an excuse to stare at people agonize. A good spirit to have during this crappy era of recession, especially if it involves eating slimy seafood, LOTS of beer and enough bands for 2 days. Plus, it’s such an American thing to do! Even some Latinos were going for slight inebriation.

And if you’re wondering, no I didn’t get paid to write this. It was just pretty damn cool to be there.

Next time, I’ll actually fight for a seat and enjoy dinner inside the lounge. 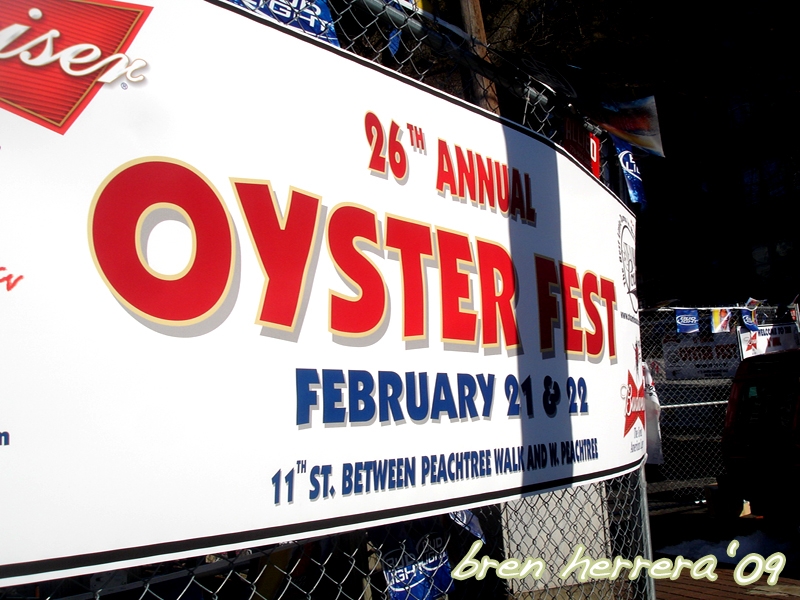 **WOULD YOU GO TO THE OYSTER FEST IF YOU LIVED HERE!?*