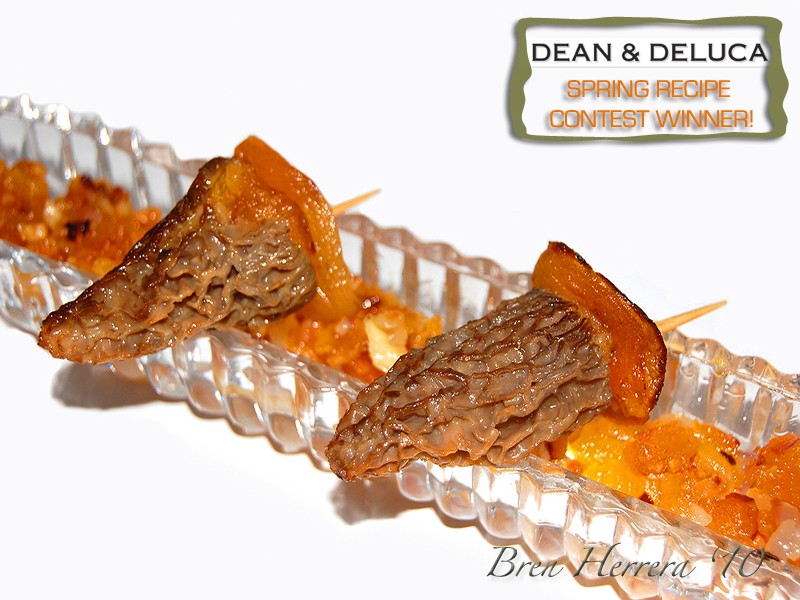 It is finally here, though I love me some Winter and snow and cold weather and all the snuggly things that come with it. Aside from being able to wear awesome hats, scarves and great boots, I love being able to play with and eat seasonal Fall foods, like pumpkin soup. And carrot soup. And rabo encendido. And pomegranate-anything. And the list goes on and on.

But, it’s now primavera, and new harvests are starting to yield amazing ingredients.

Some of the ones I tend to gravitate to at the markets are citrus fruits, Florida avocados, garlic (which is a year round must  for me as part of the Cuban Holy Trinity), asparagus and artichoke.  The latter isn’t very akin to Cuban or even Latin cuisine, but I’ve played around with it enough to make it work with some of our staple flavors.

So, in anticipation of getting ready to get busy with all the new flavors of the season, I started perusing the aisles of  the Int’l market next door to my place.  And then, I find out about Dean & DeLuca’s Spring Produce Recipe Contest. The idea was to create a recipe using some of their pre-selected Spring ingredients, as listed on their blog.

I had two days to think, create and make.

From the list, morels jumped out at me! As much as I love mushrooms, I’d never eaten a morel–I don’t think. Imagine that. Truffles are one thing, and the one mushroom that makes me the happiest. The aroma alone is intoxicating. But morels have never really enticed me.

I first chose them as the base of my recipe because of their aesthetic resemblance to tripe (which I heart very much so). Some describe them as honeycomb-like, which is just as true. I was also inspired to use them because they’re seldom, if ever, used in our cuisine, so I wanted to somehow infuse it with those staples I mentioned above. And then finally, I was inspired because when Joel Robuchon and I met, his sous brought out a stunning bowl of fresh porcini, just flown in from Asia. He spent time talking about how he ensures his staff hand picks each single fungus to make sure he ends up with the most perfect looking and smelling mushroom–the highest quality possible. 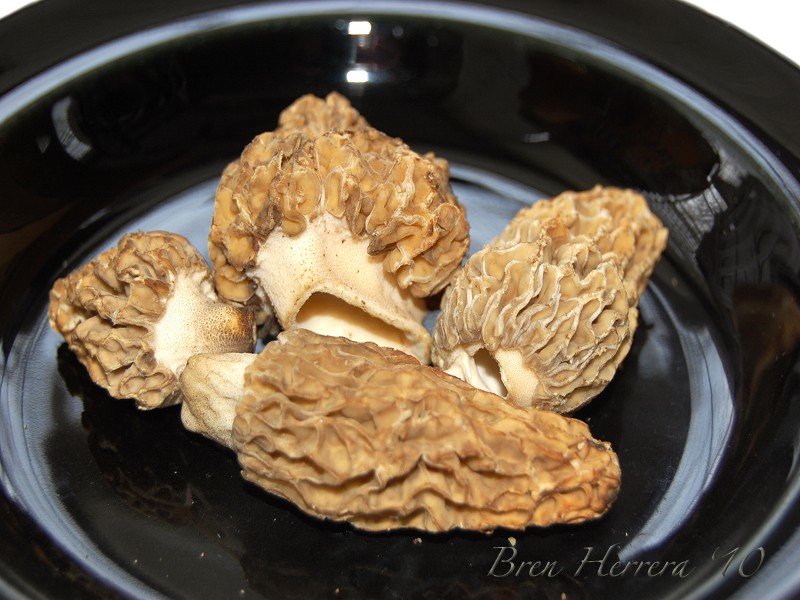 I wanted to apply the same approach to selecting this gourmet food. This earthy and very meaty ‘shroom is not cheap, let me tell you.  I went to Whole Foods and they only had them in the back. They brought me out a box and quoted me $40/lb. Yikes. Thank goodness I had some time on my hands, cuz I sure indeed stood over the box, staring first, and then digging through, looking for the perfect FOUR! Yes, four, because at that price, I wasn’t even going to get 1/2 lb. Not being cheap, just didn’t know what the experiment was going to be like.

It took me about 30 minutes to hand-pick the ones I bought, and each one embodied those qualities Robuchon encouraged me to look for. 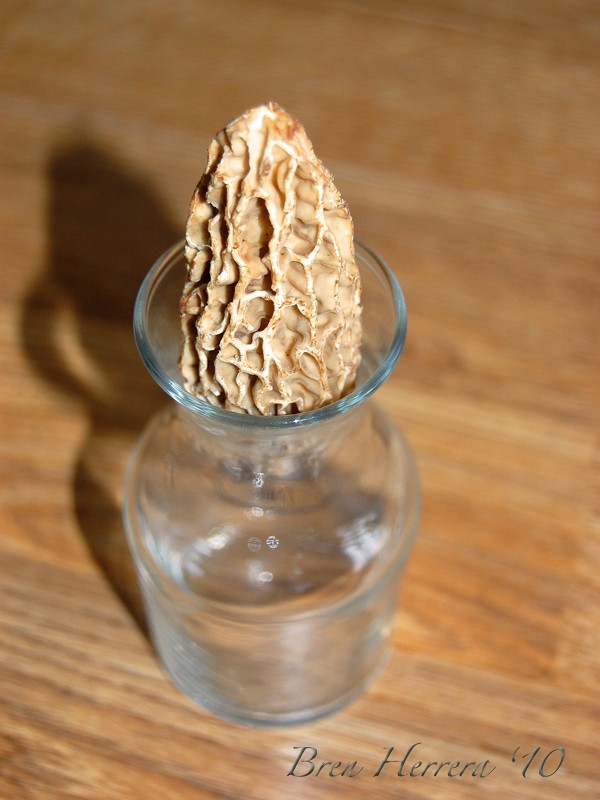 Here’s a good website that talks about the morel mushroom, its properties and how to best use them (including some classic recipes). I’m interested in mushroom hunting, as I’ve seen some nasty smelling fungus growing in my own backyard that intrigue me; but, I’ve also seen some beauties out in the wild. That’ll be a post for another day, though mushroom hunting season is nearing.

Love these, too. Don’t buy hardly enough, but they’re a super source of  vitamins. I grew up eating fresh apricots, either in smoothies or salads. Again, not something entirely too akin to Latin cuisine, but definitely something we incorporate on the occasion.

I chose apricots simply because I’m so used to eating mushrooms as a savory dish. I thought mixing up the morels with something sweet would be totally out the box for me (and even you). They’re in season, but unable to really find them just yet as fresh fruit. So, sun-dried it was. Bought a jewel case of those tart little things and nibbled away at some, while I made my 1st time recipe.

Oh yeah baby! This is where it’s at. Garlic, ajo, garlic, ajo! I can bite right into this stuff, I swear. Men, beware if you want to get all snuggly. Oral pores aren’t so sexy after garlic infused-anything. However, since I’m a huge fan, I think garlic should go into everything! This was a no brainer for me. The only thing I did want to add that wasn’t on the list, and I used for  enhancement and flavor puroses only, were red onions.

Smart. I have to say.

I sauteéd a mixture of minced apricots, garlic and red onion (a pinch of salt if you need to) in a bit of olive oil and it came out delicious! Better than I expected.

All that went into the mushroom, which was slightly challenging as the opening after removing the cap wasn’t very big (except for one big cahoona, which I opted not to show in the final dish pic). I then lightly seared/sauteéd the morels in butter. I closed off the opening with half of another apricot.

There was extra fruit/garlic mix, so I used that to line this pretty crystal dish my mom recently bought me. I diagonally lined up the mushrooms on the dish, et viola, mira, a nice and different appetizer for  you gourmands!

I was pleased with it, but have to say, like any other mushroom, you have to really like the meaty, earthiness and sometimes pungency of taste they offer. They shrink down quite a bit, so they’re not going to look as plump as the uncooked ones. Plus, all the water retention is evaporated the minute they hit heat.

Here’s to a winning recipe and hopefully I can get that gift card to buy some of their chocolate!

*UPDATE Monday 3/29/10* I received an email from Dean & DeLuca in NY early this morning to let me know their team of chefs had reviewed all the submissions and they loved mine the best, so I won!!! Woot Woot! Thanks so much to D&D and team for the honor and thinking my creation was a smash hit! It’s pretty awesome to be recognized by such an A-class gourmet foodie outpost such as Dean & DeLuca, so you know I’m trippy happy! You can read their blog post about the win here.  Now, what should I get with the gift card they’re sending me?!?! 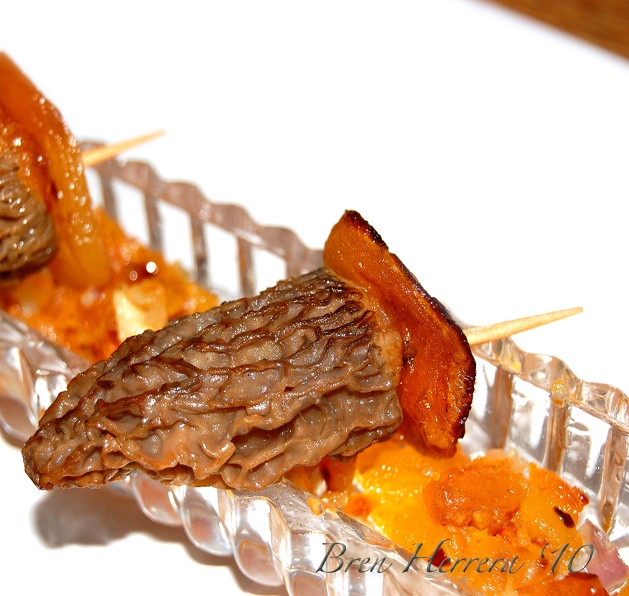 WHAT DO YOU THINK? WOULD YOU TRY THIS AT HOME?

WHAT ARE YOUR GO-TO SPRING INGREDIENTS?

Rinse morels and pat dry, completely.  Remove cap and slightly open/expand opening, about ¼ inch.  Set aside. Mince 5 medium apricots. In medium skillet, heat olive oil on medium.  Add apricots and red onions and pinch of salt if you like. Sauté for 2 minutes. Add garlic and sauté for additional 2 minutes.  Set mixture aside.  Add butter to same skillet and lightly brown morels for 2 minutes, on medium heat. Using tongs, gently turn mushrooms in order to brown all sides. Remove from heat. Using a demitasse spoon or a smaller utensil, fill each morel with apricot and garlic mixture. Reserve remaining mixture.

Take remaining 2 apricots and split them in half, using your fingers, leaving four thinner slices. Quickly sear those in same skillet, for about 30 seconds.  Place one slice of apricot under each mushroom and secure using a toothpick.  Using remaining apricot and garlic mixture to line our serving dish. Place morels diagonally on dish.