The Depot, A Train Ride For Locals

I recently put on some fly shoes and called a friend: “hey, going to eat at The Depot. Want to go?”

We showed up and was jubilant to see it’s street placement. As I got off I-20 and made a left onto Boulevard, the next big thing you’ll see is the Depot. On a sort of stale street in East Atlanta, the building is shaped like a train. The restaurant/bar is a rescue mission where the old Railroad Depot that was erected over a century ago, thus the name.

Its stand alone position draws attention, which is a good thing in that area; Cabbagetown and Grant Park to be exact (do note in picture above).

We entered through the back and got a quick glimpse of the kitchen through an enormous window, reminiscent of a real train get up. I like it when I can see what the chef and sous are doing. My friend and I made a our way past the main bar and immediately were seated. No wait! This was unreal for a Saturday night. The place wasn’t too packed, but maybe it was because it was only 8pm.

The interior decorum was dark, with solid wood seating and floors, but I was warm. It immediately reminded me of a hot bbq joint I used to frequent in Georgetown, DC. This was a good way to start the evening. 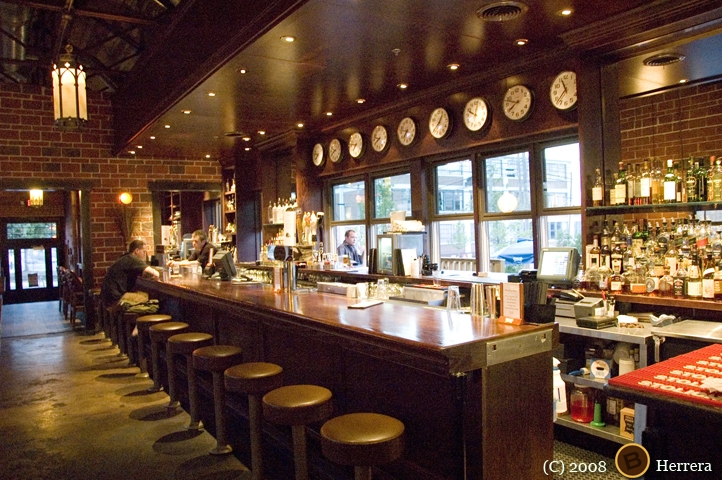 I always appreciate good music when I’m eating. It keeps me from eavesdropping on the the next door eaters’ conversation. And this night was no different. I nodded to Madonna’s Like a Virgin while panning the appetizer selection. I was expecting to see everyday American fare, but the rice cheese balls jumped at me. I first ate this Italian snack in Rome some time ago–my recollection of my first bite was enticing enough to order here. Nothing else really captured me, seeing as though I don’t do shellfish and its likeness was offered. So I moseyed on over to the main entrees and spent no time deciding on the lemon and wine sauce grouper. I was disappointed when my friend ordered the same thing. I was hoping to be able to taste their popular meatloaf.

I only ended up eating one rice ball; I found the marinara sauce to be very generic. My friend didn’t think so and devoured all 4 remaining balls. At that point, I was feeling like I should have ordered something else. While we waited for our main entrees, I enjoyed observing the ethnic mixture of eaters. Why of note? Coming from DC, where all nations are represented, seldom has been my experience in Atlanta where the multi-ethnic sharing of space is reality.

Our food finally came; about 5 minutes after the couple next to us whom sat down 15 minutes after we ordered. That didn’t fly so well with me. I was so hungry I wanted to nibble off their plate, and probably should of have been entitled to! Back to our table. My friend and I have the awful habit of ordering the same food, so I won’t be able to comment on anything on the menu other than the what you see below. It was really good and surprisingly well seasoned. I usually find that wine sauces are lacking proper combining with whipping cream.  I ordered mashed potatoes as my side and my friend had grits, which I didn’t taste. I was fully satisfied with keeping my fork on my side of the table. Fish sauce was so good I wanted to order a second plate. But that would make me greedy.  I devoured the spinach and tomatoes and picked over the mashed potatoes only because it was late and I was watching my carb in-take. 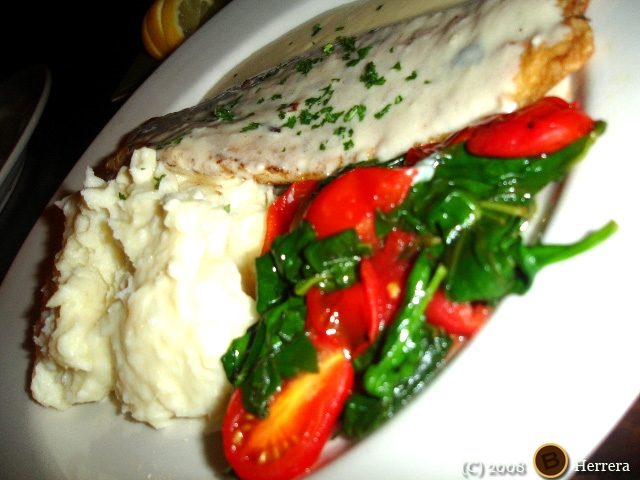 For what ever reason, I passed on dessert. Very unlike me, especially since the Oreo cake was on my checklist for ordering.

So while the food was well seasoned and definitely a step or two above your average neighborhood bar, I wish I would have seen our server a bit more; not an over-intrusive presence, but a refill on my water would have been nice. She didn’t seem to be too thrilled to be serving us. The manager paid me more attention than she did. The throwback background music was a highlight for me and really did add to my overall experience, still boppin’ my head while we paid the bill. I’m glad Grand Funk Railroad’s “Locomotion” did not come on.

Oh, and for you beer lovers, I did notice a huge range of bottled and draft options! No reason to sit at a booth when you can actively enjoy food, music, football on flat screens and beer at the bar!

If I had the grouper recipe to share, I’d give it to you. After all, it was very tasty and worth trying even at home.  In the meantime, if you live in Atlanta, pay them a visit. You’d be silly to go back to your every Wed. night spot. Next time I go back, I will partake in dessert and cocktails, two things that are a must!

5 thoughts on “The Depot, A Train Ride For Locals”