The Onion Tweet & the Quvenzhane Wallis’ of The World 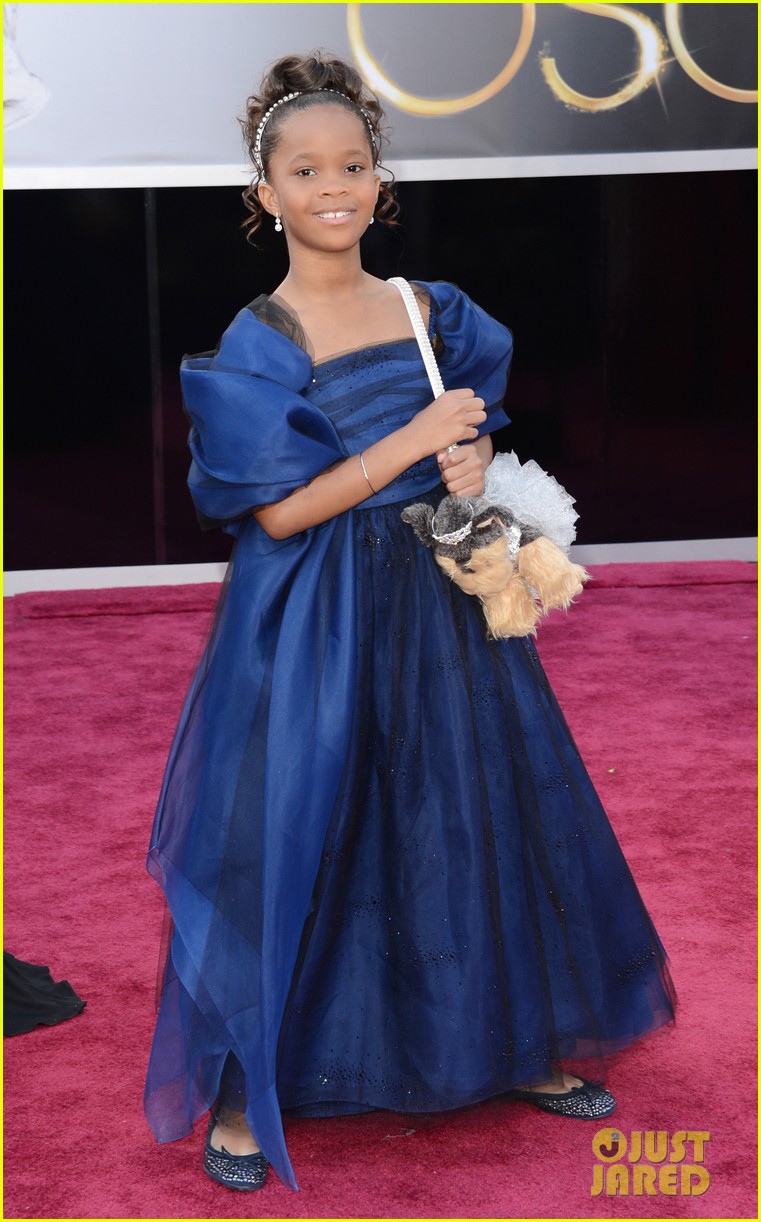 Twitter has changed the way we think, talk, and engage as a global culture. Sometimes it’s great, other times all it does is bring forth the ugly souls and spirits in people; people lacking awareness and not even caring to own a filter piece, saying what they will no matter the impact. Impact is good if the thoughts and sentiments shared on an instantaneous international platform are positive, enlightening, and educational.  Not when they repress, offend, and degrade others. Especially 9-year old little, innocent children. A girl named Quvenzhane Wallis nominated for Best Actress. And the repulsive folks at The Onion, whom I’ve visited in the past, did that to our culture and beyond during the Oscar Twitterfest last night.

This isn’t a political space but I couldn’t resist addressing the disgusting statements by the social media managers at The Onion.

This is what they said: 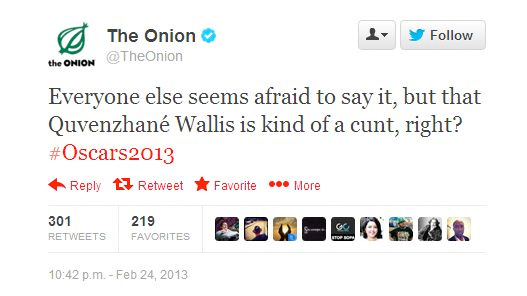 And it matters to me for several reasons.

I am a black girl. I’m an Afro-Cubana. As a child, my sister and I were the only “brown” girls in our school, aside from my best friend whom is Ghanian. As such, we stood out. We were the darker of the other Latino kids and obviously have a Caribbean look that the Central and South American kids didn’t.

While I never really experienced racism per se as a little girl, there was one incident that’s stayed with me. A neighbor living 4 doors down, whom we were really good friends with, a white boy, called me a “brownie” while in a fury over a friendly debate on the soccer field. I was 8 and went home crying. I knew exactly where the sentiment was born — we were the only non-white family in the neighborhood — and he’d never had black friends.

We eventually settled into a long-term friendship as teenagers and young adults but his visceral disregard for my feelings even at that age had an impact.

I spent most of my college days at UVA pretty clear of racism though I was rooted in Thomas Jefferson’s history of slave ownership. Self-imposed segregation was sadly visible while I was there but it didn’t phaze me until that one day… A white classmate side-eyed me and declined when I asked if I could read over some legal notes I missed taking from a lone previous class (I was out sick). In the very same class, she hands the very same notes to another classmate. She was white.

It may not have been so blatant, but I felt it. And that’s what matters.

And that stuck with me.

As a working 24-year old adult in corporate America based in DC, I never thought I’d hear the words nigger come out of anyone’s mouth in my circle. Not on 17th and K streets, the crux of law and business in the city. Not possible. Not while in a $400 suit.

Until that day when a white man, sitting on the corner outside of my building yells:

Time stood still. I remember the unison pause walker-byers took, waiting for my reaction. It was 8:45 am and I was in a hurry to make it up to the 5th floor for a 9 am meeting. I looked at the man, shook my head and continued. Was he talking to me? I panned the immediate audience and surely, I was the only black woman walking at the time. I called my mother from the elevator. She sighed and said “It’s okay hija. Ellos no saben” — It’s okay daughter. They don’t know.”

In the spectrum of my adult life, 3 incidents is not too shabby. But those three left an impact.  And while my life is perfectly amazing with unbiased people, the world is still infested with hatred against black girls.

The comments by the indignant people at The Onion speak to the aura of disregard, malice and general attack on little black girls still. They, we continue to be oppressed and ridiculed. Why are you degrading and attacking the spirit of a Oscar-nominated child of whom you know nothing about? That little girl will always know she was called out of her name in public for no reason. She will always wonder why. And the impact will stay with her forever.

And she’ll be fine. But that’s not the point. It’s the idea of a perpetual sick way of thinking and license to say words to a child that can’t defend herself.

But she nor any little girl should have to.

Quvenzhane Wallis is a nine year old woman of colour. Let’s let what @TheOnion did sink in and remember that Dakota Fanning never had this.”

In a radically unchanging world when it comes to black people and the perception of who we are, Hawksworth sums it up.

I’m a woman of colour and that’s not ever going to change. I cringe at the idea of any one of my black nieces or my own children the day I have them having to battle and defend their existence.

The Onion, you’re vile, owe the young girl a public apology, and need to educate yourselves. What you  said was dangerous. Think about it.