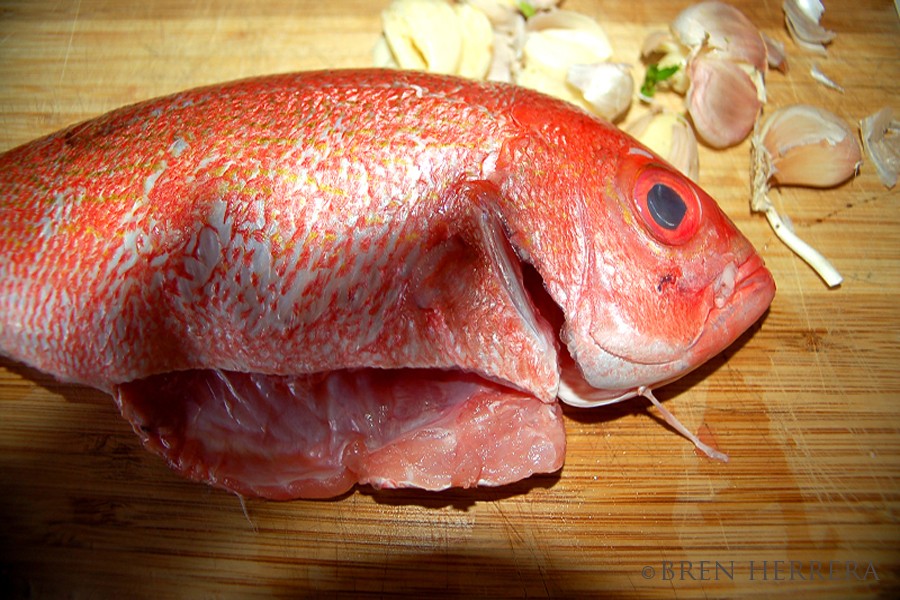 I really do love what I do. Sometimes though, it tests my motivation and I simply get tired. I catered a 50th birthday dinner party for 12 last night, so I didn’t get home ’til midnight (I cooked on site). I had to unpack all my cooking gear, feed Geisha, let her out and then pack…new croc wedges: check.

A sistah is tired.

Sometimes I get into this really bold and quasi-über confident mode where I’ll try anything new without a recipe or really tasting it as I go. Is that possible? I do think I have a natural talent for kick a** cooking! This is probably Chelsea making a cameo appearance so please forgive me if that sounds cocky. I really don’t mean it that way. It just it what it is. And it was only further confirmed by the dinner party I hosted last night for a group of 50 yr. olds!! That was hilarious and I’ll have a post on that later this week.

I’ve always loved red snapper, especially at Thai restaurants. Haven’t had it in a while but it’s the one thing I love to order every other visit. Cuban and Latin Americans eat pargo any kind of way, but I don’t remember my mother ever really making it. Short of recently seeing it prepared in avocado in a Cuban cookbook, I had kind of back burned it from my top culinary choices.

But then a good friend of mine, and one that oft-time will offer to take me grocery shopping provided I cook for him (hec yeah!!), kept suggesting he wanted me to make him escoviche. Interestingly enough, I recently had it at P. Diddy’s restaurant, “Justin’s”, in Atlanta (a whack experience if ever I’ve had one in a supposed fine restaurant–45 minute wait to be seated with about 8 tables available, no hot tea, no Splenda, and a host of other ghettoisms). My meal was actually very good (though that did not make up for the sub-par service) and I walked away wanting to try it.

So, I took up A’s offer and had him take me shopping. We went to an int’l farmer’s market and bought whole (head and everything) red snapper. The price was so incredibly low, had I been greedy, I’d ask him to buy 6 or so more pounds! Hugs and kisses all the way to the register, he couldn’t be more giddy. I couldn’t help but tell him he’d better calm down in the event I didn’t exceed his expectations.

We went on our merry way.

I looked up the main ingredients and found way too many recipes so I did what I always do and made up my own receta. That’s what cooking’s all about anyway–well to me. There seemingly isn’t one prescribed way of making this Jamaican or Caribbean dish so adding mine to the mix will be okay. I found that most of them did call for this super spicy pepper called Scotch pepper (which I saw a paste of at the farmer’s market), but I left that out and subbed it for red, yellow and green peppers instead. I also added and omitted some other goodies, namely spices and herbs.

One thing I hadn’t tried but absolutely love is coriander! I know what you’re thinking. But oh my God what I’ve been missing in all my Cuban and fusion cooking!! I am officially addicted to this spice and have become a bonafide lover of ALL spices! I called my mother immediately after having smashed it in my mortar & pestle and questioned her non-use in over 40 years of cooking. Naturally, she was like “mijita, no, no– eso no se usa en Cuba”.

I told her to get it together.

I hope all of you had a beautiful Easter.

I’m now in DC for a 48-hour turnaround biz visit and my father has taken great pleasure in knowing I’m coming up so often. Why? Cause it means I’ll cook (so I was told). And so I did. I sent my cousin off to the Vietnamese owned Latin food market to buy 3 large snappers. The escoviche I so nicely mastered on my first try a few weeks ago for A, was what I made for dinner tonight. Let me tell you something about my father: he’s very, very hard on me. He’s my editor when I do professional writing (a political journalist of 30 years), my biggest critic and my number one devil’s advocate. But most importantly, my best man friend, ever. So, pleasing my father is not an easy task. He doesn’t intimidate me, just inspires me to work harder and possibly prove him wrong.

Anyway, I got a high five when he was done with his full headed and tailed red snapper escovich. It was cooked to point, not too salty, plenty of vegetables, right amount of tart flavor (vinegar), coriander seeds popping in aroma and flavor and not too much oregano! YES! I wasn’t relieved as much as I was super happy that I felt confident in being able to add this dish to my repertoire of non-Cuban food. And, I had so much fun cooking it!

My grandfather is Jamaican and so I felt a sense of connection when eating my de-eyed fish (I kept the eyes in my dad’s). I’ll have to cook it for him sometime this Spring. He’ll deeply appreciate it.

Finally, I thought: maybe this is a Cuban red snapper. After all, I added oregano and cumin (required in all Cuban food) and of course some vino seco. Oh, and sorry I covered the entire fish with the mix of vegetables. I was yet again so eager to sit down and eat, I didn’t put much effort into plating it properly, for picture’s sake.

I love that cooking is an art, ergo, no rules!

(Notice how there are no green peppers this time. How come there weren’t any in stock, is beyond me!)

Make sure your fish is cleaned out inside. Rub salt and pepper on both sides. Stuff cavity with 1/2 of the garlic, half of coriander and squeeze one lemon on fish. Let sit for about 30 minutes. In large non-stick skillet, turn heat to medium and cook fish on both sides for about 10 minutes. Add remaining juice from the lemon marinade. While fish is cooking, add vinegar, bay leaf and all vegetables to a separate pan and cook for about 10 minutes on medium-high heat. Remove fish from heat. Add oregano, coriander, remaining salt, pepper, remaining lemon and orange zest to the vegetable mix. Stir gently and cook for another 10 minutes on medium. Transfer fish to larger pan, using 1/2 of the oil it was cooking in. Add vegetable mix to fish. Add cooking wine and additional salt to taste if needed. Cover and let cook on low-medium for another 10-15 minutes.

Serve with with rice and any salad you like. Serves 4-6.