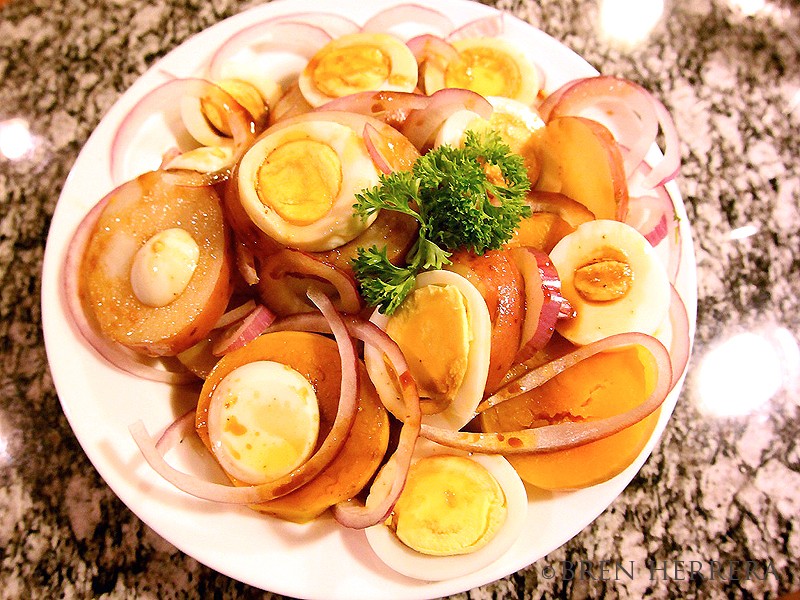 Most of my clients are women.

To date, I’ve had 3 men. What is it with that? I thought fellas were into shaking things up and being inventive in keeping romanticism alive in a thriving (or not) relationship?

So many men I know are lax and live by the philosophy that women aren’t made the way our mothers and grandmother’s were.

Well, I say the same about said men.

I like to be properly courted. Yeah, open the door for me every time I get in and out of the car. Walk closer to the curb and gently bring back to the inside with your hand curbing my waist. Rub my feet after you know I’ve cooked in 4″ heels.

Hell, I cook for you just about every day. And not just ho-hum, mediocre food. I burn in my cocina, as one former “friend” says. I am that old fashioned woman.

When a man approaches relationships with a very old fashioned mentality, I always raise my eyebrow. More often than not, he expects the woman to be in the kitchen, slaving over his meal, while he reads his paper, as I set the table and chime the bell. It’s not the old fashion philosophy where he takes ownership of his role as the man of the house. It’s more of a machista attitude.

Geesh, this is NOT supposed to be  post about my perceived notion of where ill-fated relationships stand this day. Really. My point is to highlight and recognize when a man has matured to the point where he indulges his woman and satiates all her senses.

A good friend and I barter: food for photography. Works very well. He loves my food, I love his work. Plus, he’s John Legend’s road photog. And, since John doesn’t know he’s my husband-to-be, having SM in my circle of friends, makes John very accessible.

SM has been dating a woman for 4 months and she was visiting ATL for the 1st time. He wanted to do something sexy, out the box and impressive, without losing his true personality, for Lady A.

I needed a last minute photo shoot for some head shots. And he needed something other than eating breakfast, lunch and dinner at the socially hot spots here in the “A.” He was so clever in calling me.

SM has a discriminating palate. Not because he’s into gourmet. He simply hasn’t explored too much. But, he knew exactly what he wanted. And I complied. Plus, what he requested is something I’ve designated as my super healthy go-to dinner when I don’t have time to get all complicated.

Simple doesn’t mean sacrificing taste, quality or aesthetic appeal. Doesn’t mean home-cooked food, either. This is when the cliché “less is more” applies.

He rented out a lovely condo suite with a full kitchen at TWELVE, a high-traffic hotel in Atlantic Station that seems to attract  Atlanta’s finest and every other city’s pretty people. Everyone from Housewives of Atlanta, to Usher, NBA players & Beyoncé have been spotted exhibitioning there.

The menu included the following for his super sweet lady: 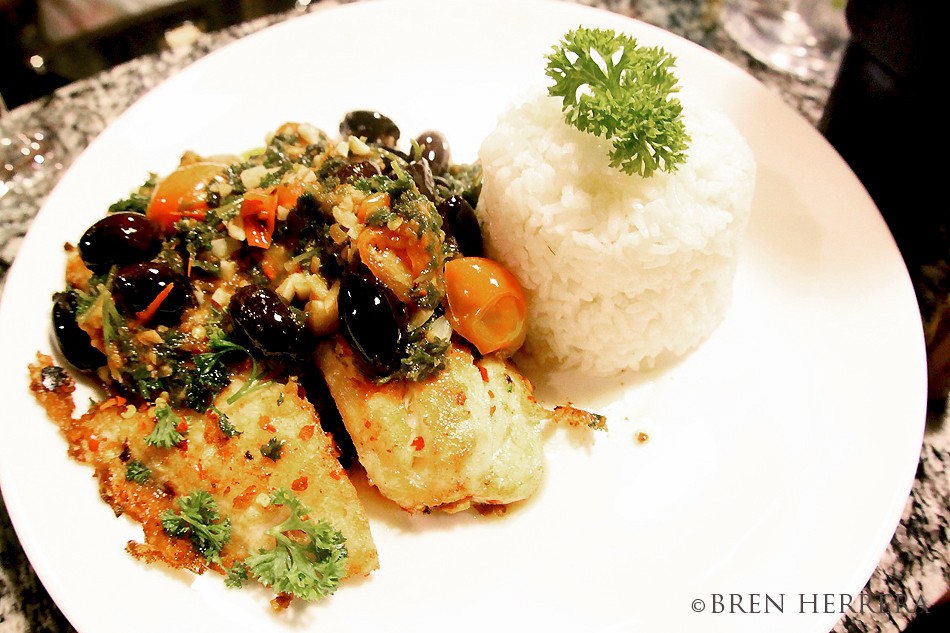 And, flan of course, but this time in ramekins, which I do not like making, but a whole “pie” would not have been appropriate. That story will be another post.

A high-light of the evening is when I broke out my New West Knife Works Sontoku knife. I’ve used it at home only twice before, but for pictures sake (and to give his lady something to talk about), I brought the 8″  piece of art with me. 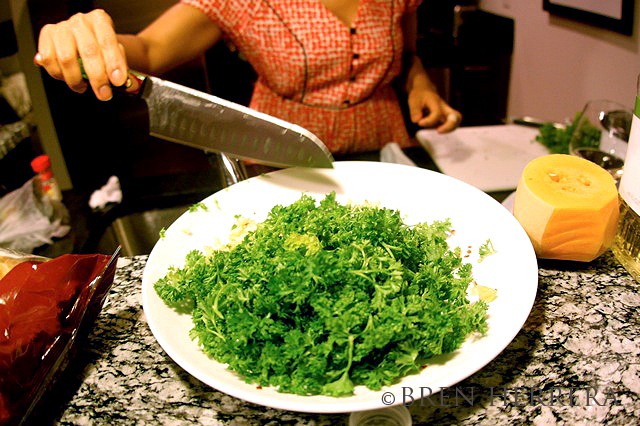 I have over 15 knives–not a lot for someone that cooks, but when you have GOOD knives, I’ve learned you really don’t need a whole lot. Can I tell you, I just looooove this knife. Its handle is gorgeous for starters; but it also holds well in my small hand, giving me great control. The weight distribution is perfect and the blade is perfect for having sliced the eggs just the way I needed them to be. No mess, not crumbled cooked yolk or broken white. It really allowed me to present a beautiful salad.

I’ll eventually do a full review of my knives and compare what I have to NWNW.

The best part is this: As I’m packing, I accidentally placed the knife in the big carry-all, without placing it in its leather sleeve. The knife quickly made its way out of the bag, landing in this position, right as I’m stepping into its path: 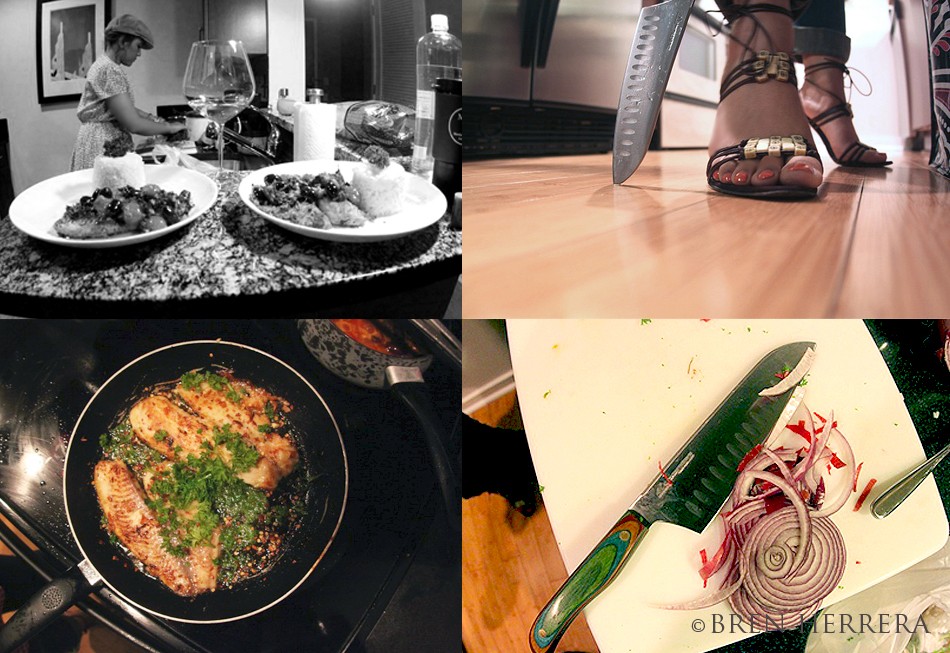 Needless to say, the knife did its job, being sharp enough to butcher my foot, had my timing been off and dented the hardwood floors!

I’m looking forward to playing around with more of these Japanese style knives, especially the bread knife, since I’m experimenting with Cuban bread varieties.

Of course, without coming close to obliterating my toes!

My friend and his lady enjoyed a private and intimate dinner, and she was enamored even more with her guy. She took some notes while I cooked in the pressure cooker and asked great questions on the difference between steaming and boiling. She demonstrated interest in possibly cooking for him, seeing as though she’s NOT any type of cook. On the other hand, SM tried kalamata olives for the 1st time and loved them (mind you, last time I made him the dish, he discreetly pushed them aside–guess he didn’t know a small jar costs $5.00).

Miss A was impressed with his openness. And, I was charmed by his exciting interest in doing something different for her.

Our photo shoot did happen the next day, albeit cut short due to heavy winds and on-coming rain, but I share here a few sneak peak shots of our expedited, 30- minute test run. A re-do is scheduled.

Men, get your game together and show her you aren’t all about video games, b-ball games, brews, and all else that sometimes bores us. Engage our senses and demonstrate you are thoughtful in many ways. Restaurants run the gamut, but hiring a personal chef that custom designs a menu to accommodate your palate is just about  the sexiest thing you can do (well next to gifting her with orgasmic shoes) and is priceless!

The recipe for the tilapia can be downloaded here. Don’t mind the pictures in that post. I had been blogging less than a week!

THANKS TO SM FOR THE FABULOUS SHOTS!

Heat olive oil in heavy large skillet over medium-high heat. Sprinkle fish with salt and pepper. Add fish to skillet and sauté until just opaque in center, about 3 minutes per side. Transfer fish to platter and set aside. Add tomatoes, olives, and garlic to same skillet; sauté until tomatoes are soft and juicy, about 2 minutes. Add parsley and crushed red pepper to same skillet. Season sauce with salt and pepper if needed. Spoon over fish and serve with white rice. (you may substitute tilapia for orange roughy or red snapper).

Serves you and him, twice.