When My Papi Cooks, It Goes Like This…Fennel In Orange & Wine Jus With Seared Seafood 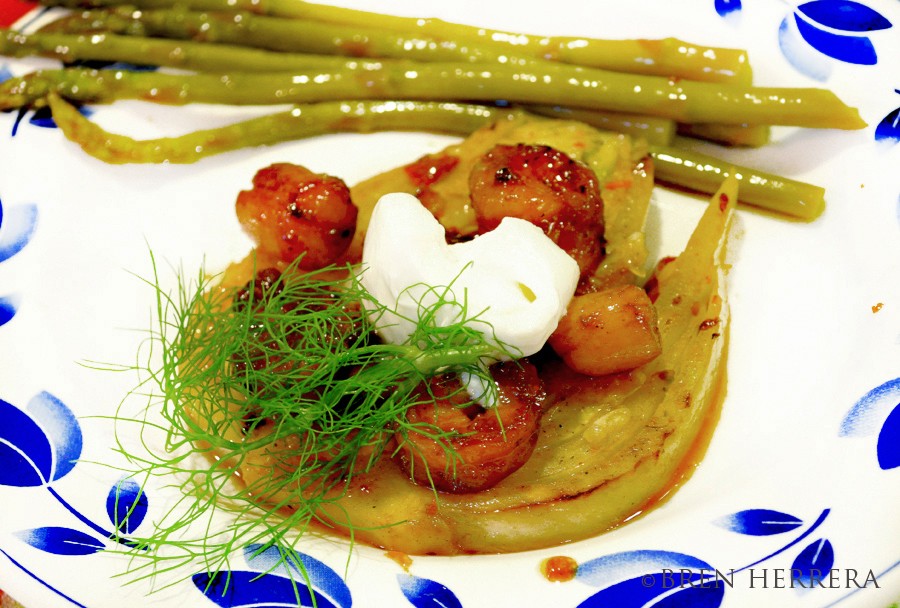 I’ve said on this blog more times than I care to count that mami is the Master Chef in our home. For more than 40 consistent, non-stop years, she’s been the woman that cheerfully, creatively and sometimes, painfully stands behind all of our warm and loving meals. Her food has never failed us. Ever. When I compare my black beans to hers with a slight grunt that something in my batch is “off,” her appropos response: “mijita…I’ve been married 43 years and have 5 children… you’ll get it one day.”

“But, I do this for a living!!”  That’s what I’m thinking in my head. I suppose there’s something to be said for having a responsibility to cook for a solid family.

In the last 10 years, mami has made the smart decision to slow it down in the kitchen and let the rest of us entertain her with our musings. When I’m home, I try to cook as much as possible. She particularly loves this dish. But admittedly, she hogs (unapologetically) her kitchen and doesn’t like many people all up in her stuff. She gets flustered and anxious; especially when she’s cooking. Misplacing and shifting things around her kitchen is a major cause for gritos y maldichos.

In contrast, she loves it when my father cooks. She relishes in the moments he initiates cooking dinner. She sneaks in a phone call to me and whispers “papi me’sta cocinando!” I love when I hear that. It means the kitchen is a mess, she’s quietly going crazy inside, but externally tickled papi is making a concerted effort to alleviate her of the daily grind. Beyond giving her a break, she’s enamored with the idea that he gets insanely methodical in his preparation and execution — the complete opposite of her approach.

He’s taken a liking to cooking and it’s always a big deal. Not so much because he’s cooking, rather because este chulo pulls out all bells and whistles when he cooks! I wish you could  see him in action. He transforms into this single-minded, tunnel-visioned machine that is not to be interrupted. There is a full mise en place, a full-length apron, mits, and timers! The only thing missing is a stiff chef’s hat and a personalized chef’s coat with a  pen.

Most recently, right upon our return from our 8-day vacation to Mexico (which I’m writing about in the next two weeks so stay tuned), papi was inspired to cook it up for me and mami. I’m not sure if he was motivated by exchanging notes with male restaurant owners in Mexico, or simply recognizing that while we were on vacation, mami played her part and made tropical breakfasts every morning and typical Cuban dinners 4 of the 7 nights we were there.

Either way, so thoughtful, no!?

Last Sunday, as we’re settling back into normal weather and our own environment, papi announces he’s making dinner. He’s specifically preparing something he’s been tweaking for a few week’s. Something that has touched a sweet spot in my mother. A dish she’s called me to rave about twice already.

I was beside myself watching my old man cook and pondered his interest in working with other flavors and textures. He loves Cuban food like no other and seldom deviates. Italian come in a distant 2nd.

Let me get to the dish. A hearty fennel bulb, laced in an orange and wine jus (with Latin infusions, no doubt) with seared seafood. To tickle her feelings (really to show off) and finish his plating, he garnished the plate with fennel leaves. My version had seared salmon, but theirs looked phenomenal and so sophisticated.

This dish was so Mediterranean, a far contrast to our Cuban fare,  I was impressed he’s assigned himself with perfecting it. Perhaps the inspiration to fancy up his cooking started after a personal phone call on my cell with Joel Robuchon just two years ago… I remember the French conversation and making out words like “passion” and “dedication.” I’m not sure that dedication to cooking is papi’s veins, but a growing passion is definitely sensible.

My taste buds will tell you that! 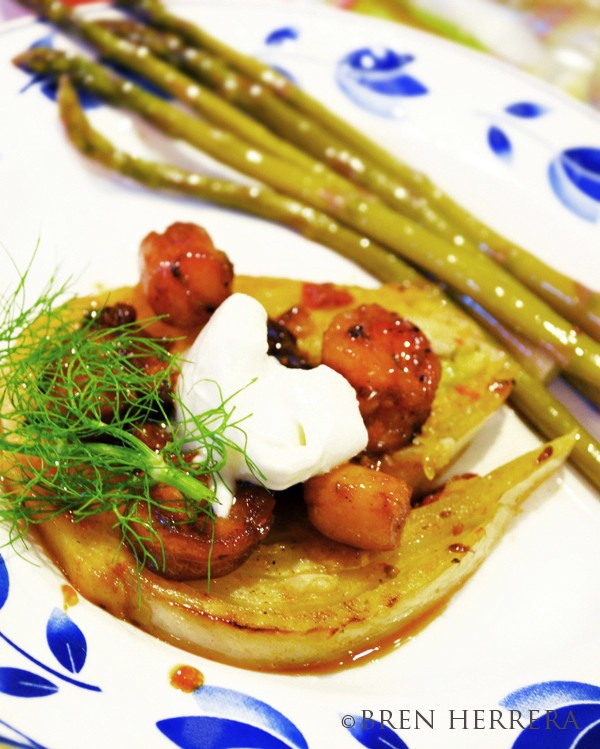 I’m not sure where he got the recipe from, but it was damn good. As much as I tried to savor every bite, I just ate it too fast. The composition was lovely and the presentation was top notch for a man that has been cooked for and served for 40 years!  I did take a bite out of his fennel and sipped a bit of jus from mami’s plate—standard eating manners at our table.

The most lovely part about dinner was sitting down together and enjoying a refined dish that has nothing to do with Cuban or Latin food other than the love he put it in. And, he put lots of it! Oh, and the requisite sazon Goya!

Mami and I were two happy chicas that night. And he? He gloated while he swirled and sipped his Sauv Blanc!

Does your dad cook? What’s his staple dish? The one the whole fam raves about… Share!

*Adapted by major proportions by my dad from an unknown vintage cookbook in my parents’ kitchen!

In medium skillet, sear shrimp and scallops in olive until lightly golden and par cooked. Using tongs, remove from heat and set aside on plate. In same hot skillet sauté each fennel slice, turning over on each side until golden brown and al dente.  Pour all of orange jus sauce over the fennel slices, add seafood and cook for 3-4 minutes or  until shrimp is fully cooked, on low-medium heat.

To plate, place fennel bulb in center of plate and pour some orange & wine  jus over top. Place 2-3 of each shrimp and scallops on each fennel slice. Pour more jus on each bulb, reserving enough for each slice.  Scoop a small d0llop of crème fraiche on top and garnish with fennel leaves. Serve with roasted asparagus if desired.

0 thoughts on “When My Papi Cooks, It Goes Like This…Fennel In Orange & Wine Jus With Seared Seafood”