Why Braising Beef is Still En Trend…And Our Sacred Meat 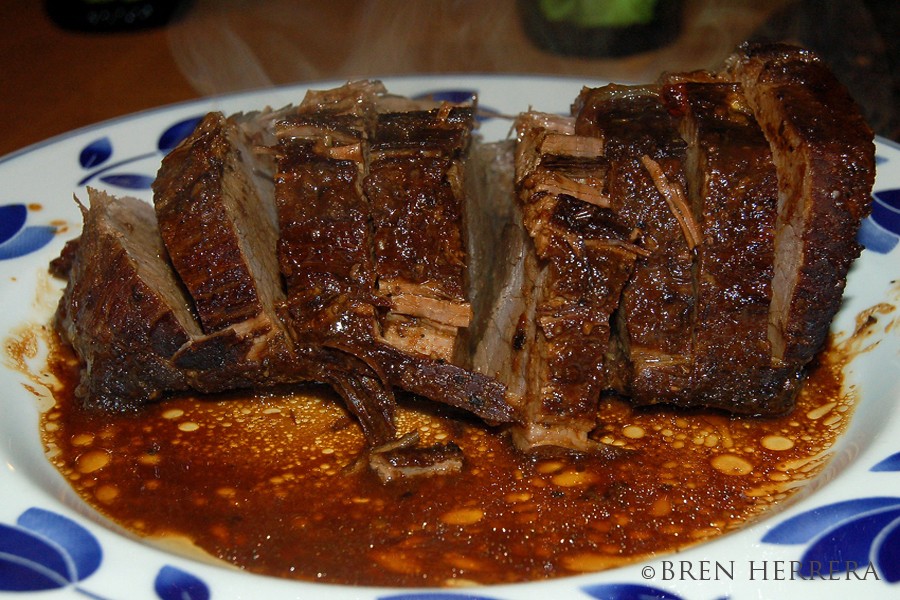 On a  Monday afternoon, I can’t help but relish in the amazing jaunts I enjoyed over the last 8 days in Spain, with a quasi planned overnight stay in Munich (my 1st time ever in Germany). I had a splendid full week of visiting family, friends (with new ones to boast) in various parts of the country, starting in Granada for a family friend’s wedding. There was a great opportunity in food research and development presented to me over there, so I tinkled in that for a bit in between the non-stop activities. It’s been 7 years since I’ve been to Spain and this turned to be one of most memorable. Surely, more on that to come… there’s too much goodness not to.

On a whim and somewhat unplanned, my boyfriend joined me with a very impulsive but wonderful decision. I was instantely excited because of the added element of sharing a country I love so much and beyond that, I’d be able to explore the famed cuisine with him. You’d be shocked to know he’s only recently been introduced to eating tapas, the essence of Spanish food culture. I know, right! It’s kind of like a Spanish person learning the hamburger culture for the 1st time. Ironically, and not too long before he decided to join me, we enjoyed a romantic evening in DC, dining at Jaleo, one of my go-to restaurants in the city. A pretty authentic tapas restaurant, E was impressed and warned me I’d just turned him onto a new kind of eating he’d be begging for quite frequently. He most loved the lomo de buey con valdeo, a juicy hanger steak with mustard sauce Valdeon blue cheese. Genius combination. I’ve had it several times and now default to its goodness every time I go.

And so going to Spain shortly after that uber delicious and perfectly timed date, I was eager to explore some of the finer foods in Spain. If eating in Spain was going to be anything like E enjoyed at Jaleo, then we’d get along just fine and not have any hang-ups about where and what to eat. However, I knew going in that ham, the sacred meat there, was out of the question for both of us so were set out to find the best carne de res in honor of the buey. 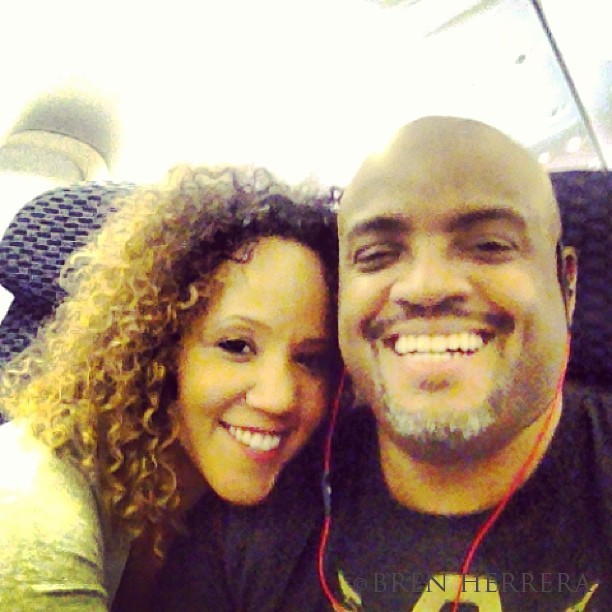 (our last minute journey to Spain in search of good food! Taken on iPhone via Instagram)

My continued research into the culinary trends Rick Bayless set out for a group of us to tackle during our Sargento Flavour Journey campaign, gives me a chance to chat about braising meats, a cooking technique I intimately adore. It’s one of the first cooking methods Mami taught me. Red meat is our sacred food and for that, I’ve learned to love most cuts from most animals, especially la vaca. It’s the quintessential source of protein in our home and I enjoy it whenever I can. There are many kinds of cuts you can braise, naturally… here below is some lovely dear meat my father hooked up some time ago for a family feast.

The most ubiquitous red meat dish you’ll devour in our home is carne asada. Making a great carne asada is the test for any true Latin cook. The essence of a beautiful asada is achieving a perfectly browned round of meat. That starts with braising. Most cuisines also apply braising to cooking meat so it’s not an unusual or novel technique in creating amazing meat dishes. It’s a classical style of cooking meat and a full-proof method to get the juiciest meat you can imagine. 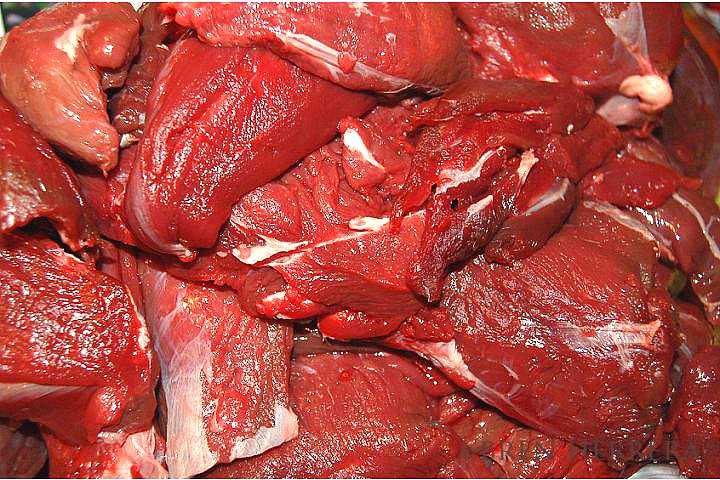 For our carne asada, the important thing is making sure it’s browned properly and all the way through by braising it. This process is what ultimately gives it that color and look. After all, we know the aesthetic of food is the first thing that attracts to us dishes.  The subsequent steps (ie, simmering in the right amount of liquid) helps in tenderizing the tough cut and yielding enough sauce for the final dish. For browning or “dorando,” we use canola oil and let it cook for 30-45 minutes or so, depending on the size of your round and temperature you’re cooking it in. To ensure you accomplish that pretty and perfect dorado color, you should turn your chunky round every 15 minutes (again, depending on the size and temperature). 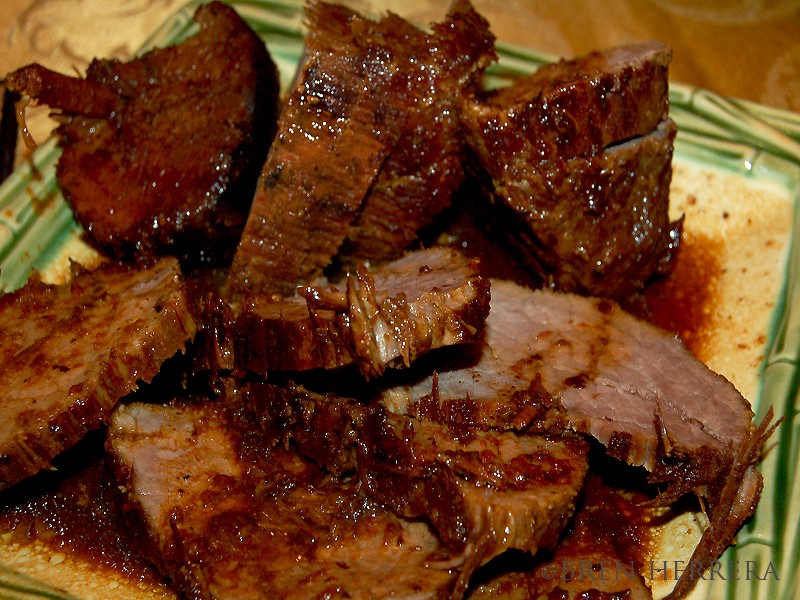 Given braising is nothing new and pretty much a method every home cook should know, I was curious why Rick put it on the list of trends. After a brief conversation while in Wisconsin earlier this year, the fine culinary rock star said it simply: “Good meat never goes out of style. And braising it is how to you make it happen.” There you have it. If his words aren’t reason enough to keep it on the top of your cooking skill set, then perhaps searing or roasting is your way to go!

Back to spain. You’d die to know E and I had every bit of bad luck finding good meat a la buey. That was his standard. It was our goal to have one, just one really good meat plate there. But nada. With the exception of a tremendous and almost as good as my rabo encendido (really Mami’s), we came up super short. I was shocked and actually embarrassed I wasn’t able to find him anything he could love me for even more. I had visions of him cutting into a nice 8 oz of steak with papas bravas on the side, even a side of olives of magnificent slices of Manchego to start (his new appetizer addiction). Even if were the same exact hanger steak with cheese dish we had in DC, we’d be satisfied. But nada, friends. Sure, lots of ham and some seafood, but nothing in the consistent realm of good meat.

We were disappointed.The tapas experience was even mediocre. I started wondering where I had gone wrong in my mental itinerary of meal planning. But I realized this… and then felt better… we don’t travel to be tourists with the expectation to enjoy what we’re accustomed to here home, rather to immerse ourselves in the local culture and tradition on all fronts, mostly food.

Fortunately, the oxtails we ordered every chance we had kept him energized and talking about how great José Andres’s restaurant is. I’m not sure his comparison of what he ate at Jaleo is representative of what any visitor to Spain should expect. It’s just the chef’s menu based on his preference. But, believe we will be having the lomo de buey con valdeo next time he’s in DC. In fact, I’m off to AZ this week to see him so he just may get lucky and I’ll make my version of it… with Manchego instead. Because after all, it’s my favorite Spanish cheese. Hopefully I’ll get my hands on a Sargento one before I got out there. He loves to see how I work, not just for personal satisication, but this… the core of my bread and butter.

Or, I could really blow his mind and make him the oxtail en molcajete which I seduced with oozy slices of Gruyere. There’s something wickedly awesome about a divine melted cheese on a beautifully prepared piece of meat. He agrees so that’s my chance to redeem myself and give him a lesson on braising meats so he can do it when I’m not with him.