Why I love Cooking Under Pressure with That Pot! A Delectable Coconut Flan 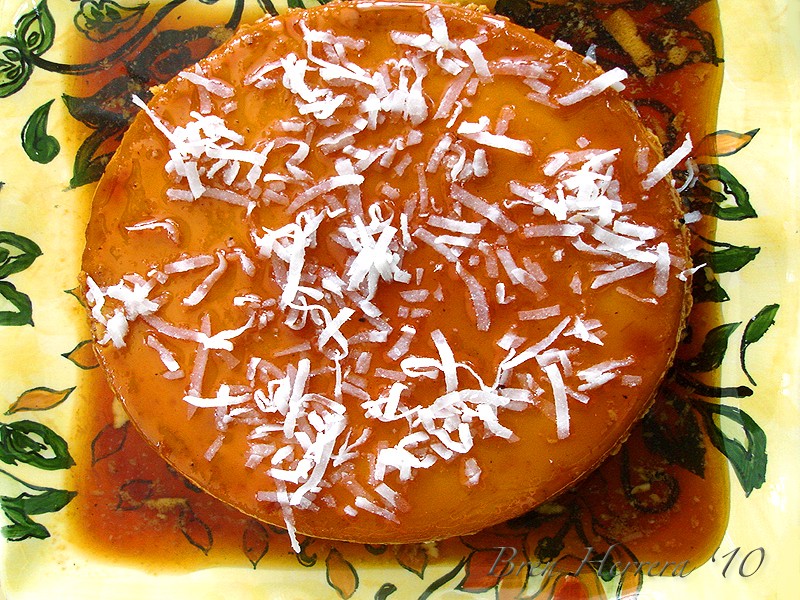 I’ve not spent enough time talking about pressure cooking and why it’s so vital in my kitchen.

Getting caught up in producing commercials, traveling, hosting culinary benefits for Haiti and just wanting to cover other foods, easily drifted me away from what I do most and what I’d love to teach you to use.

For those same reasons I just mentioned, pressure cookers save me A LOT of time and allow me to still enjoy good, healthy food in a whip! I’m definitely not in the game of sacrificing my hustle because I have to slave in the kitchen. I guarantee that if you try it once, you’ll come back to it time and time again and really rely on the old school cooking pot to make a lot of your most time-consuming dishes.

I have a penchant for flan. All kinds of flan. I’m always coming up with new flavors, inspired by desserts I eat out or ingredients I think will work in the egg and milk based custard. I get flan is not for everyone. One, because of its consistency; and 2, because of how long it “traditionally” takes to make. Not an easy feat. Especially for those short on time and patience, both of which I’m definitely lacking.

In this post, I talked about the basics of pressure cooking and in this post I gave a really good Carne Con Papa recipe along with vintage recipes from a 1970’s MiroMattic pressure cooker I snatched at an Estate sale (great place to grab them, by the way). But that’s another story.

Those introductions bring me to the making of many flans. “Traditionally,” flan is made in a bain marie, as the French call it, or baño Maria, as we say in Spanish. Same thing: A water bath to slow cook foods.

Growing up, mami made flan once every 6 or so weeks, leaving us fighting for it when ever she took the time to actually indulge us. Thus, the name of this blog! Ha.

60-90 minutes, in a really old pan, with black gook on it (from burnt sugar), covering the custard with foil and constantly refilling the main pot with water, was just not my idea of sexy cooking or time efficiency.

So the story goes that my cousin and I were playing around in the kitchen one day and discovered that we could pressure cook our beloved dessert. Oh, it was ON!! What? No more killing time around the house doing things you loathed, while making frequents pitstops in the kitchen to “darle on ojo al flan.” No pun intended, but the first time we made a flan in the pressure cooker, we were done in a jiffy!

Some purists will argue that it’s cheating and that pressure cooking a custard alters the consistency of the dessert. Not so. I’ve done them over and over and over again, enough, to have compared the two methods, and I stick by it being just as pure as pure can be.

In this socio-economic culture of living in a New York minute and not having time to spend on making intricate and tedious foods, pressure cookers make nothing but perfect sense! If you’re like me and constantly on the go with various projects, including cooking for clients, surely you’ll understand that we don’t have time to sit and twiddle fingers!

THIS coconut flan is a perfect example. A Facebook friend messaged me on random morning and wanted a flan for that day! Not only to pick up, but to eat that same evening! Talk about pressure. I had to stop whatever I was doing and get to it. Had I deferred to the “traditional” method, poor friend would have had to wait until the next day to enjoy it. No matter how you make it, flan takes a good 7-9 hours to chill to a perfect temperature, resulting in a smooth texture. Making it in the pressure cooker, allowed me to done in 15 minutes from start to finish (cooking time) and allowed it to chill 4 hours before she picked up. By the time she had dinner, it had chilled enough and the family was good to go. 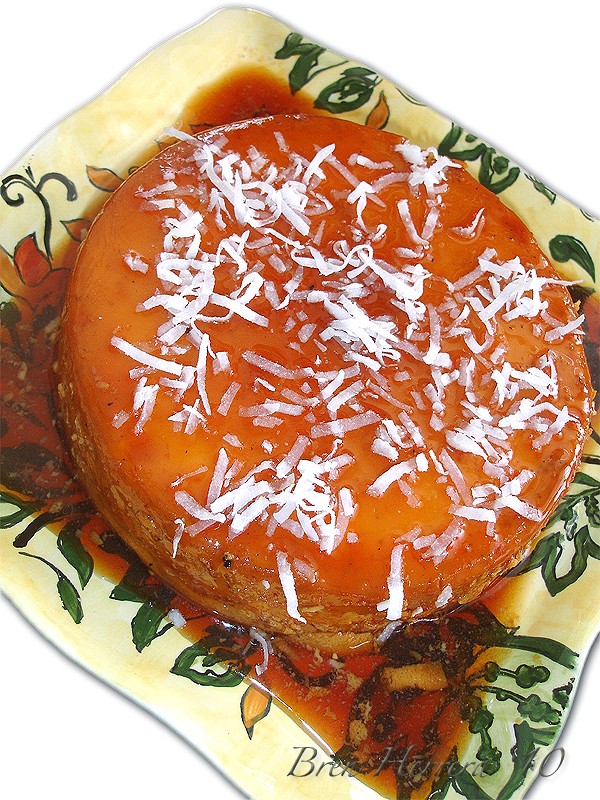 I made my $40, saved gas energy since my stove was only on for that short period of time and served her an incredible flan, earning her brownie points with her hubby. I think he took her shoe shopping, or something like that.

Here’s to using the pressure cooker for making flan! Even Joël Robuchon loves my flan. And yes, that one was made in a pressure cooker! So pretty I even framed it and it’s now hanging in my kitchen!

There are two ways of making this coconut flan, but for purposes of simplifying it for you, I’m providing the recipe for the easier one, based on availability of ingredients. All is noted below!

Now I need to make it for a man that will reciprocate with the shoes of my superior liking! 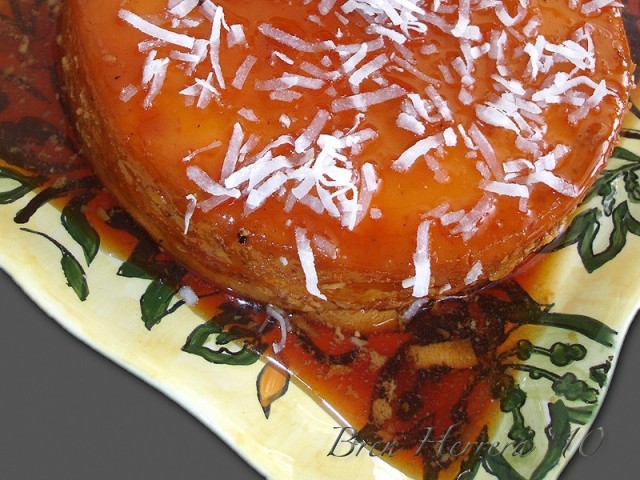 In a bowl, combine eggs, sweetened condensed & milk & extract(s) and whisk for about 2 minutes. Add 1/ cup of shaved coconut and mix. Set aside.

Add sugar to the flan mold and bring to medium-high heat. Allow all of sugar to melt down until golden caramel, stirring constantly. Do not allow the color of the sugar to become too dark or burn. When sugar is fully liquified, carefully coat the bottom and entire sides of the flan mold using hand towels to hold the pan (I suggest using a brush if you are not experienced in handling extremely hot caramel). Let sit for 2 minutes until sugar sets. Pour mixture into pan using using a medium mesh hand strainer. Close pan tightly.

Fill your 6 qt. pressure cooker with 3 cups of water or up to 2″ from the bottom. If using a 10 qt. pressure cooker, add an additional cup of water. Carefully place the flan mold in the center. Close the lid to your pressure cooker. If using a vintage model, place the jiggler on top. If your vintage model has a jiggler with 3 PSI settings, set it to 15. If using a new model that that does not have a jiggler (which I would recommend), lock it and turn your heat on to high. At exactly 5 minutes you will hear the pressure cooker start to hiss. This means it has reached its pressure point. Let cook on that setting and on high for another 5 minutes. Turn off heat and allow the flan to finish cooking with the remaining pressure inside the cooker. Do not cook for more than an additional 5 minutes, even with heat turned off. Your new model will allow you open the lid once all of the pressure is released. If you’re using an older model, remove pressure cooker from stove and place under cold running water until all pressure has been released. Open carefully and remove your flan pan using dish towels or thick oven gloves. Be extremely careful, as the cooker is really hot.

Do not remove flan from pan. Refrigerate for 7-9 hours or overnight. To serve, use a butter knife to loosen the sides of the flan all the way around. Take a large plate, place upside down on top of flan and flip! Sprinkle reserve coconut shavings on whole flan. Be careful not to waste any of the caramel sauce, cuz it’s too good!

29 thoughts on “Why I love Cooking Under Pressure with That Pot! A Delectable Coconut Flan”