ZAYA, A Place for Good Times 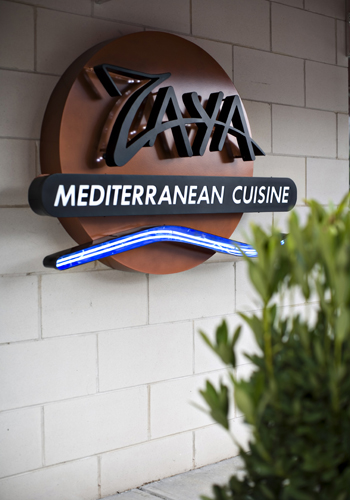 I hadn’t eaten Mediterranean food since I moved to Atlanta. And every time I visit home, I don’t have time to peruse the city streets of DC to eat at resto’s I frequented before. So I was very excited when I got an invitation to eat at ZAYA’s, Atlanta’s newest Eastern flare restaurant. I had seen it before while shopping for some shoes in a funky chic part of town, but kept walking for some unknown reason.

The ambiance was nice and instantly reminded me of Spanish restaurants in Europe. The music reminiscent and appropriate of Middle Eastern culture.This was a welcoming feeling and probably set the tone for the rest of the evening. I always say food should take you somewhere.

Shortly after having arrived, the owner, Matek, introduces himself and ensures I’m sipping on something from the bar. While not the biggest bar to enjoy on a Thursday night, it offers everything you would want. I ordered a custom drink I call “Cuban Mami”… straight goodness.

So dinner comes, more of a tasting of 50% of the menu, and we dig in. I was particularly impressed with first of 3 appetizers which was something wrapped in smoked salmon with fennel and lemon/butter sauce.  Not on the menu, but it’s worth asking for. That was so smooth it cleaned my palate. The cheese fingers were interesting and something totally unexpected in this cuisine (a medley of feta, jack and cream cheese wrapped in dough, fried and topped with pepper jelly). The humus was good too, but not mine! For my taste it was too creamy and lacking season. But that’s just me. I’m glad I cleaned my palate, which I soon learned I was going to badly need. The amount of lamb kabob, lamp chop, chicken kabob and other goodness on our platter was too much to handle! Of all the meats presented, I enjoyed the kafta and rack of lamb the most. Both were cooked to perfect doneness and none of the seasonings in the kafta over powered each other.

Now let’s really talk serious talk. Dessert. Something I can forgo dinner for. Seldom do I, but it’s very realistic. When the very attentive server brought us 2 platters of 5 different desserts that looked as heavenly as heavenly looks, I excused myself and made elbow room. I’m looking at their menu online as I write so that I can respectfully share with you what I had: Ashta, Molten Cake, Strawberry Creme Brulee and two more I don’t know names of. The 4th was made up of roasted bananas and honey. Need I say more? The Ashta was an eggless stuffing inside crispy filo and pistachios. OH MY GOODNESS. I’m so sorry for the 3 journalists that didn’t show up. It just mean I ate more! And really I did. Had I known dessert was going to be so good, I believe I would have passed on the entrees.

To finish off this seemingly seamless night of good eatin’, we made our way to the patio for hookah’s! Now, this is something I’ve never tried, but was a bit tempted. I tried two puffs, coughed and put it down. I thoroughly enjoyed watching the rest of the crew puff and boast about the double apple flavor. I was satisfied sipping on my Turkish coffee (as strong as Cuban espresso).

I’ve read other reviews of Zaya and some have been on the poor side. I beg to think they weren’t at the same place I visited on Thursday. If for nothing else, I’d return just for the dessert.

Oh and fellas, there’s a belly dancer to lace your table while you eat, on Thursday nights!

For 3 hours, I swear I was on a small Greek island. Thanks Zaya, you’re my new friend. 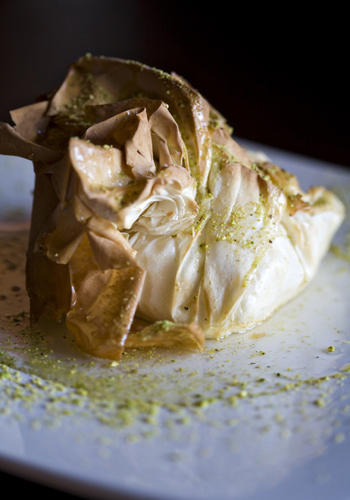 What NOT to wear: NO BELLY DANCING GEAR, PLEASE!